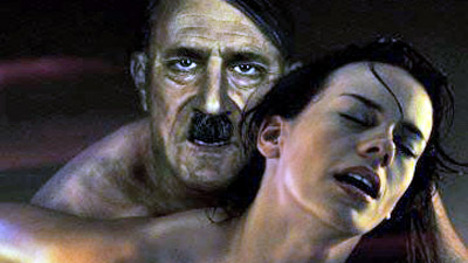 The campaign was designed to counteract diminishing public awareness of the dangers of unprotected sex, its German makers said on Sunday. But AIDS awareness organisations say the ad instead likens those who suffer from the virus, and not the virus itself, to the notorious dictator.

“We asked ourselves what face we could give to the virus, and it couldn’t be a pretty face,” Dirk Silz, creative director at the Das Comitee advertising agency behind the “AIDS is a mass murderer” campaign, told news agency AFP.

“The campaign is designed to shake people up, to bring the topic of AIDS back to centre stage, and to reverse the trend of unprotected sexual intercourse,” the agency said.

The ad, due to be screened on German television after 9 pm and in cinemas, shows blurred clips of a couple having sex, but it is only at the end that the man is revealed as Hitler.

A tag line then reads: “AIDS is a mass murderer.”

The campaign, which also features posters of Joseph Stalin and Saddam Hussein lookalikes in flagrante, was organised with AIDS awareness group Regenbogen e.V. ahead of World AIDS Day on December 1. But AIDS advocacy groups are furious.

“Of course there are many HIV organisations that run their own campaigns, however, I think the advert is incredibly stigmatising to people living with HIV who already face much stigma and discrimination due to ignorance about the virus,” a National AIDS Trust spokesperson told Britain’s The Daily Telegraph on Monday. “On top of this it fails to provide any kind of actual prevention message (e.g. use a condom) and may deter people to come forward for testing,” the spokesperson added.

Meanwhile UK-based HIV charity the Terrence Higgins Trust told the BBC on Monday that the ad campaign was “insensitive.”

“One in four people in the UK with HIV doesn’t know he or she has it, so anything that could increase stigmatisation and discourage them from coming forward to be tested isn’t helpful,” said Vicky Sheard, the organisation’s policy officer, adding that it was dangerous for the advert not to encourage the use of condoms.

AIDS has killed around 30 million people worldwide, and almost 6,000 more die each day, according to the campaign.