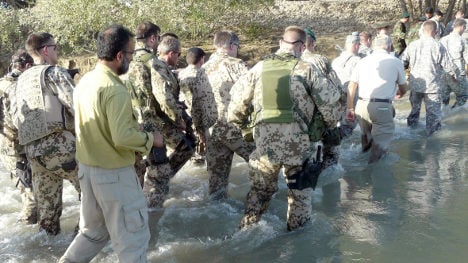 NATO investigators at the site of the bombing on Saturday. Photo: DPA

The death count continues to vary as NATO slowly pieces together the events of early Friday morning, when Bundeswehr forces ordered a strike on what they thought were Taliban fighters stuck crossing a river with two stolen tanker trucks full of fuel near Kunduz.

On Sunday, The Washington Post reported that German commander who ordered the air strike may have breached NATO rules by basing the call on a single Afghan intelligence source. The newspaper said a NATO fact-finding team estimated that about 125 people were killed in the bombing in northern Afghanistan, at least two dozen of whom – but perhaps many more – were not insurgents.

The Washington Post said that appeared to be in violation of a tactical directive aimed at reducing civilian casualties recently issued by General Stanley McChrystal, Commander of the NATO’s International Security Assistance Force (ISAF).

The article also featured McChrystal criticising German Colonel Georg Klein for not bringing German troops to the bombing site sooner to investigate reports that civilians had been killed.

An unnamed German military official told daily Neue Osnabrücker Zeitung on Monday that the criticism was a “fathomless impertinence,” because his comments were published after McChrystal allowed an American journalist to accompany him and an investigation team to the bombing site – which isn’t usually permitted.

“It stinks to high heaven,” the source told the paper, adding that tensions between the NATO allies had increased in recent years.

Meanwhile Afghan president Hamid Karzai sharply criticised the German-directed attack by a US fighter jet, which he said killed more than 90 people.

“What a misjudgement!” he told Parisian newspaper Le Figaro. “More than 90 dead for a simple fuel truck that was unable to move in a river bed. Why didn’t they send ground troops to get the tanker trucks back?”

While the German Defence Ministry at first had denied any civilians were killed in the bombing, on Monday Defence Minister Franz Josef Jung told broadcaster ZDF that victims were “mainly Taliban.”