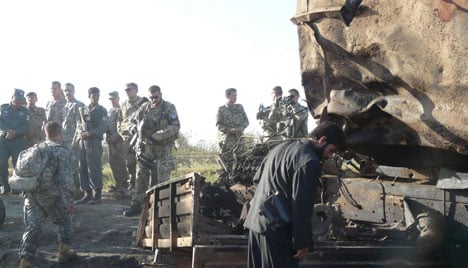 ISAF spokesman General Eric Tremblay said NATO investigators were “on the ground” in northern Kunduz province where the bombing took place on Friday, but had not yet reported any findings. Nor had ISAF come up with a definitive death toll, he said.

Local officials told AFP Sunday that a total of 56 people died in the area near the Tajik border early Friday morning – 54 in the air strike and two, a father and son, who were killed earlier by insurgents. Tremblay said NATO investigators were in Kunduz to “talk to the patients, talk to the villagers, to local authorities, get some information,” before reporting their findings.

The Washington Post reported earlier the German commander who ordered the air strike had possibly been in breach of NATO rules as he based the call on just one intelligence source.

The newspaper said a NATO fact-finding team estimated that about 125 people were killed in the bombing near the city of Kunduz, at least two dozen of whom – but perhaps many more – were not insurgents.

But Mohammad Omar, governor of Kunduz province, told AFP by telephone Sunday that six civilians, including a child, were among a total of 54 people killed in the air strike, which targeted two fuel tankers hijacked by the Taliban. The driver of one of the trucks and his son were killed separately by the Taliban, he said.

“According to our findings 56 people were killed. Forty-eight men were identified as armed while the rest were civilians. Fifteen were wounded, including two Taliban,” said Omar.

While officials insisted most of the dead were militants, President Hamid Karzai, who is leading the count in controversial elections, said any targeting of civilians was unacceptable and sent a delegation to investigate.

On Saturday, the commander of US and NATO troops in Afghanistan, General Stanley McChrystal, promised a full investigation into the strike, in which Karzai’s office said 90 people were killed and wounded. Afghan officials have given different death tolls and precise figures are difficult to clarify. Police and the Interior Ministry earlier said up to 56 Taliban died and 10

more wounded, including a 12-year-old child.

The Washington Post said the German officer who called in the strike, whose named was not disclosed, first received grainy live video transmitted from a US F-15E fighter jet, at a German tactical operations centre, showing numerous black dots around a fuel truck hijacked by the Taliban. It said that a single Afghan informant was on the phone with an intelligence officer at the centre, insisting that everybody at the site was an insurgent, and on that basis the commander ordered a 500-pound (225-kilo) satellite-guided bomb to be dropped on each truck.

The Post said the decision based largely on a single human intelligence source appeared to violate the spirit of a tactical directive aimed at reducing civilian casualties that was recently issued by McChrystal.

The directive states that NATO forces cannot bomb residential buildings based on a sole source of information and that troops must establish a “pattern of life” to ensure that no civilians are in the target area, the paper said.

The incident has reignited anger among ordinary Afghans about civilian casualties caused by foreign troops fighting the Taliban, an issue that Karzai has exploited to bolster his popularity.

Karzai leads a laborious count in elections held on August 20 which have been overshadowed by fraud allegations.