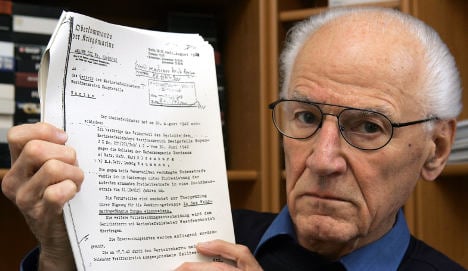 The legislation, supported by all five parties represented in the lower house of parliament, is the culmination of a decades-long fight for justice on behalf of those who refused to serve in Hitler’s forces.

One man in particular, 87-year-old Ludwig Baumann, will be sitting in the chamber Tuesday to savour the long-delayed victory of his campaign to rehabilitate these enemies of the Third Reich.

Baumann narrowly escaped execution for deserting his Wehrmacht company in Bordeaux in 1942 but endured torture after his capture and was ostracised by his fellow Germans for decades after the war.

“We thought that after the war, what we had done would be appreciated but we were only insulted as cowards, criminals and traitors and threatened,” he told reporters.

“Many of us – the few of us who survived – had a bitter, humiliating end. No one was on our side.”

Now, just days after solemn commemorations to mark the start of World War II on September 1, 1939 with the German invasion of Poland, MPs are finally ready to close the book on what campaigners say has been an enduring injustice.

Nazi military tribunals sentenced some 30,000 people to death for desertion or treason during the war, with 20,000 actually executed, according to historians Wolfram Wette and Detlev Vogel, whose work is cited in the draft law.

Around 100,000 men were sentenced to prison. The victims were not only Germans but also citizens of Austria, Denmark, Norway, Romania and Luxembourg.

All who survived had a criminal record, often could not find jobs and even faced death threats for their “betrayal of the Fatherland.”

In 2002, parliament wiped the convictions of conscientious objectors and deserters such as Baumann from the books but not those of “wartime traitors.”

These included soldiers and officers accused of crimes including political resistance – even critical remarks about the Nazis made in private – or helping persecuted Jews.

Since then, there had been repeated attempts to erase the convictions but no clear majority in parliament to do so.

Conservatives had long opposed an across-the-board rehabilitation, calling for a case-by-case review to determine whether there had been “legitimate” convictions.

However a justice ministry review conducted by former constitutional court judge Hans Hugo Klein found that the Nazis’ treason law dating from 1934 was a clear instrument of repression, so vague as to be wide open to capricious rulings.

Historians and relatives of the convicted have long called for the official rehabilitation. Few if any of those convicted are still alive today.

Recalling his daring bid to escape the Wehrmacht, Baumann said a natural sympathy with the Nazis’ victims compelled him to desert.

“I recognised then that it was a criminal, genocidal war,” he said.

He was caught a day later and sentenced to death, with only the intervention of his wealthy father persuading the authorities to commute it to 12 years confinement in prisons and concentration camps.

Baumann founded the German Federation of Victims of National Socialist Military Justice in 1990 and has since then fought an uphill battle to see the records wiped clean.

In Austria, campaigners are still seeking the annulment of the verdicts of the Nazis’ military tribunals and the rapid settlement of deserters’ claims for aid as victims as well as a national memorial for the deserters.

Such a memorial was erected in Cologne, western Germany on Tuesday.