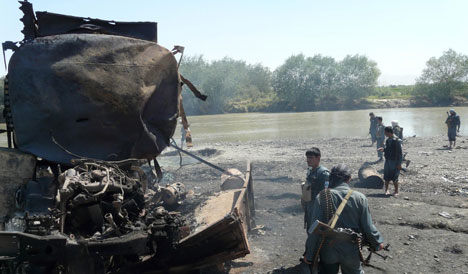 “This was a big mistake,” French Foreign Minister Bernard Kouchner told reporters as he arrived for a second day of talks with his EU counterparts in Stockholm.

The West should “work with the Afghan people, not to bomb them,” he added, as the NATO action partly diverted attention from a new EU initiative to help Afghans set up a secure, viable and democratic state.

Germany’s European Affairs Minister Günther Gloser was mum on the issue after it emerged that German troops had ordered Friday’s air strike, in which up to 90 people, including civilians, were killed according to Afghan authorities.

However, German Defence Minister Franz Josef Jung defended the action, saying in the Bild newspaper: “When just six kilometres (four miles) away from us, the Taliban take two fuel tankers, that represents a serious danger for us.”

A state secretary in the German Defence Ministry, Thomas Kossendey, said the strike was aimed at preventing a Taliban suicide attack against German troops.

“We can only assume that the hijacked tankers were going to be driven toward the German army’s camp to cause as much as damage as possible in a suicide attack,” he told the regional daily Nordwest Zeitung.

“That’s why the German army acted in such an intense manner” and asked for NATO’s help, he said.

Swedish Foreign Minister Carl Bildt, hosting the talks as his country currently holds the EU presidency, said, “Every death is a tragedy in Afghanistan. I don’t think we’ll win this war by killing.” His Italian counterpart Franco Frattini did not mince his words either: “These are terrible acts that should never happen.”

NATO has promised an enquiry into the incident which has also been criticised by Britain and which came just as the European ministers were hoping to concentrate on building up Afghanistan’s infrastructure and provide it with the tools required to become a fully functioning and viable democracy. That task was already difficult enough, given the menace of the Taliban militia and the country’s ongoing presidential vote count, with the opposition calling foul.

Europe is notably trying to put pressure on the next Afghan president to work to root out endemic corruption and respect human rights.

“If you have an administration that is corrupt then it is very difficult to go on,” as all funding disappears into a black hole, said EU External Relations Commission Benita Ferrero-Waldner.

EU foreign policy chief Javier Solana went further saying that there must be stricter rules on financial aid to Afghanistan.

Bildt stressed the need for more to be done to tackle the massive opium trade – 90 percent of heroin originates in Afghanistan.

One of the other ideas included in a discussion paper for the Stockholm meeting was the setting up of a “National Civil Servants Training Centre” to produce productive ministers and administrators. Ferrero-Waldner said there was broad ministerial support for the plans which must now be refined and fleshed out.

Frattini said meanwhile the EU was hammering out plans for an international conference in Kabul early next year on Afghanistan’s reconstruction that would be attended by EU foreign ministers.

Afghan electoral authorities on Saturday cancelled the scheduled release of the results of the Afghan presidential election which was held on August 20. Throughout the laborious process of gradual announcements, the two main contenders for the presidency, incumbent Hamid Karzai and Abdullah Abdullah, have each claimed victory.

Abdullah, formerly foreign minister, has also alleged widespread vote-rigging by Karzai’s camp and has threatened to reject any result he regards as compromised.