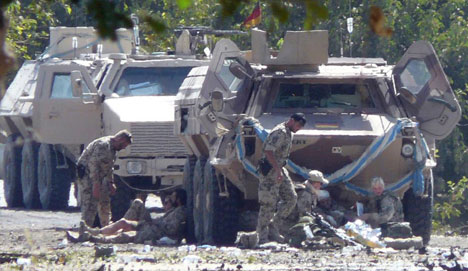 Revenge? This man was injured in the fuel tanker bombing. Photo: DPA

The German government confirmed its forces had ordered the air strike on the two fuel trucks on Friday after they had been taken by insurgents and the drivers reportedly decapitated.

There is disagreement about what was happening to the tankers, with local military saying the insurgents planned to take them to the district of Char Darah to use the fuel. They were blown up by an air strike near the Kunduz River just six kilometres from a Bundeswehr camp.

Reports suggested the insurgents were distributing the fuel to local people when the bombs fell from planes. NATO’s International Security Assistance Force (ISAF) said it was investigating the incident.

Although the German government says no civilians were killed in the attack and just spoke of around 50 dead insurgents, Afghan President Hamid Karzai said around 90 people had been killed or injured, including many civilians.

On Saturday, morning four German soldiers were injured in the same area after a suicide bomber blew himself in a car. The Taliban claimed responsibility for the attack, while its spokesman Sabuillah Mudschahid seemed to make a connection between Friday’s tanker attack and Saturday’s car bomb, saying the attacker came from Char Darah.