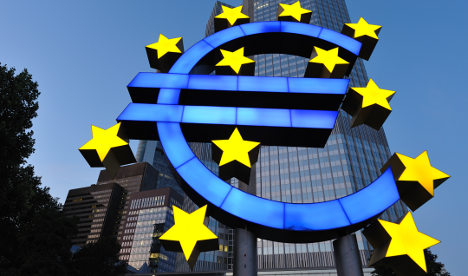 Amid talk of “exit strategies” to roll back the crisis measures taken by many authorities, the ECB’s president Jean-Claude Trichet said the bank had its own such plan, but warned it was “too soon to call the crisis over.”

“The ECB has an exit strategy, and we stand ready to put it into action when the appropriate time comes,” he said, adding that “financial institutions ultimately need to stand on their own two feet.”

Exit strategies involve ways for central banks and governments to unwind policies taken since mid 2007 to fight the worst global economic downturn since World War II. Recent indicators have suggested that these and other measures taken worldwide are beginning to help restore economic health.

As they prepare for a Group of 20 summit in the US city of Pittsburgh, many capitals are breathing easier and anticipating renewed economic growth, but ECB officials warned authorities and market players not to become complacent.

The bank has fought the crisis doggedly, cutting its main interest rate from 4.25 percent a year ago to an all-time low of 1.0 percent, loaning massive amounts of cash to banks for periods of up to one year and buying corporate bonds to unblock a key eurozone financing conduit.

He made the remarks to bank analysts at a forum organised by the Centre for Financial Studies at Frankfurt’s Goethe University.

With economies beginning to mend, markets want to know when the bank will turn off the exceptional support taps.

Chief ECB economist Jürgen Stark said: “As soon as upside risks to price stability emerge in a context of improving macroeconomic environment, it will be time to withdraw the policy stimulus.”

That meant tracking inflation and growth trends, and above all, picking the right moment to act. He also said that the global crisis would result in “fundamental changes in how economies are run,” as Europe and other western economies take stock of the damage done.

“I am doubtful whether all market participants will have learned their lessons,” he added.

Meanwhile, “most governments will come out of this crisis with the highest debt levels, as a proportion of GDP (gross domestic product), ever to have been experienced in modern history,” ECB executive board member Jose Manuel Gonzalez-Paramo warned.

He called it “wishful thinking” to expect economies to be back at square one once the crisis was over and stimulus measures withdrawn. The ECB’s support has helped buffer eurozone members against the global financial turmoil, but the 16-nation economy still fell into recession for the first time since its creation in 1999.

After contracting over five consecutive quarters however, the bloc may have expanded in the three month period from June through August.

In Berlin, International Monetary Fund head Dominique Strauss-Kahn said the global economy seemed to be pulling out of its steep slump as well and that countries should plan to wind down a broad range of stimulus measures.

Trichet stressed meanwhile that while the ECB was mulling how to ease its unprecedented financial support, markets should not expect action in the near

future. “Now is not the time to exit,” he said.

Stark said the key issue was to “correctly identify the turning point” in the economic cycle, since withdrawing economic support too quickly could stifle a rebound, while waiting too long could fuel a fresh crisis by allowing inflation to spiral out of control.

His comments will likely reinforce speculation that the bank’s main lending rate has now reached a floor and that the next change would be an increase. That is not expected however before mid-2010 at the earliest.