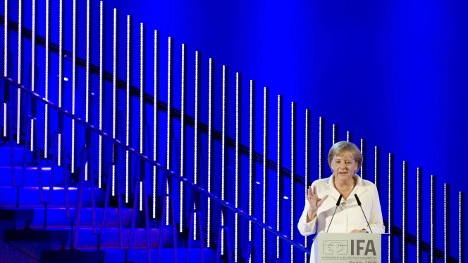 During an economic crisis, the country needs clear political conditions and a government it can count on, Merkel told daily Westdeutsche Allgemeine Zeitung.

“That would no longer be possible with the SPD,” Merkel said of the uneasy alliance her conservatives had with their centre-left coalition partner. She added that ahead of the September27 election the Social Democrats are “constantly under pressure from The Left,” a hard-line socialist party.

Merkel’s popularity remains high in polls ahead of the vote, but the CDU was battered in state elections on Sunday. The SPD, however, continues to trail the conservatives in opinion polls.

The chancellor has said she wants to form a centre-right coalition with the pro-business Free Democrats (FDP). She assured the paper there was no chance for a CDU coalition with the environmentalist Greens on a national level, either.

She also rejected criticism from the SPD’s chancellor candidate Frank-Walter Steinmeier over her campaign behaviour, saying the current situation with the financial crisis is “too serious” for such attacks.

“It doesn’t fit the times,” she said.