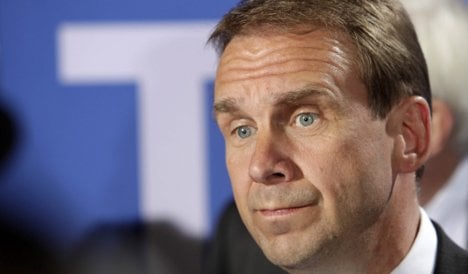 The move likely clears the way for a coalition with the centre-left Social Democrats (SPD) following Sunday’s election in the eastern German state.

Althaus had been under pressure to resign after the CDU suffered horrendous losses in the election, plunging 12 percentage points to garner only 31.2 percent of the vote. That made the CDU’s preferred coalition with the pro-business Free Democrats (FDP) impossible and handed the Social Democrats the role of kingmaker in Thuringia.

The state SPD leader Christoph Matschie has refused to accept a premier from the hard-line socialist party The Left, which won the second largest share of seats in Thuringia’s parliament, all but ruling out a left-wing coalition in the state.

The Left’s leader in Thuringia, Bodo Ramelow called Althaus’ resignation the “tragic end to a tragic premier,” before urging the SPD to send the CDU into the opposition. “The resignation is not enough,” he said.

The SPD made clear this week it was loath to form a coalition with the Christian Democrats with Althaus still as the helm. Matschie said on Thursday the SPD would still hold “equal” talks with both the conservatives and The Left before deciding on which coalition to pursue, but the socialists have rejected his demand to lead a left-wing government despite the SPD having fewer seats in parliament.

The 51-year-old Althaus, who was convicted of negligent homicide and fined €33,300 for accidentally killing a woman while skiing last winter, was criticised for talking about the tragic incident during the election campaign.

The CDU politician, who was wearing a helmet at the time of the accident, still suffered major head injuries and took months to recover before returning to lead Thuringia.