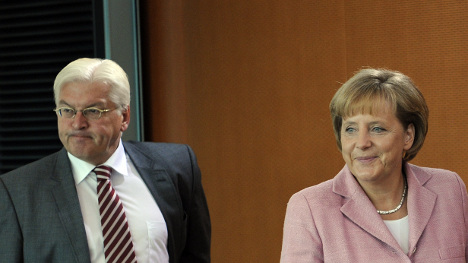 Merkel’s conservative Christian Democrats (CDU) scored 36 percent in a poll by Forsa for Stern magazine, while the pro-business Free Democrats (FDP), with whom she wants to govern, polled 14 percent, clinching a razor-thin majority.

The chancellor’s rivals for power, the centre-left Social Democrats (SPD), however, failed again to stage a comeback, despite the CDU losing support in closely watched regional elections on Sunday.

Meanwhile the hard-line socialist The Left party, the big winners of the weekend regional vote, were stable at 10 percent.

The SPD has ruled out a coalition at national level with The Left, a mixture of former communists and disaffected SPD members, but the poll suggests that even an SPD-Green Linke grouping would not win enough votes.

Germans do not vote directly for their leaders, but the poll also suggested Merkel would romp to victory in a head-to-head race with Steinmeier.

Of the 2,502 people surveyed, 57 percent said they would vote for Merkel, compared to a mere 18 percent for her rival.

Another poll, by the Allensbach Institute for the Frankfurter Allgemeine daily, showed that only one in 25 Germans believes the SPD will win the election on September 27.

This is the lowest level since the Allensbach Institute began polling this question in 1965, it said.