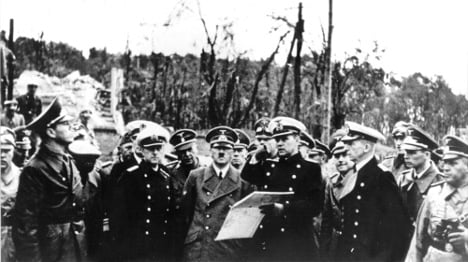 The goal was to fuel a propaganda drive and lend legitimacy to Germany’s assault – which came without a formal declaration of war – noted historian Tomasz Chincinski of Poland’s World War II Museum.

Chincinski is poised to publish new research based on period German and Polish documents, focusing on the run-up to the invasion and Nazi intelligence’s role on fomenting tension in German border regions and Poland.

One operation remains relatively well-known: the August 31 seizure of a radio station just inside Germany by men dressed in Polish military uniforms.

The purported attackers – including prisoners who had been tricked with promises of freedom – took control and announced on air in Polish that the station at Gleiwitz (now Gliwice, in western Poland) was in their hands.

Several were then gunned down by accompanying Nazis, with their bodies left as proof of the “Polish invasion,” news of which was fed to the world’s media.

Similar attacks by bogus Poles took place the same day at a nearby German customs post and a forest guard’s post.

Chincinski noted that in an August 22 speech, Nazi dictator Adolf Hitler told top military and SS leaders: “I will provide a propaganda reason to start a war, no matter whether it is credible. Later, no one will ask the victor whether he had spoken the truth or not.”

Germany had been itching for revenge since it lost swathes of territory in the wake of its 1918 defeat in World War I, including lands that became part of Poland.

After winning power in 1933, Hitler initially achieved his goal of conquest without a fight. He took over Austria in 1938, arguing that the move was legitimate because it had a German-speaking population.

That was his pretext later the same year when, in an accord signed in Munich, Britain and France agreed to let him take over the Sudetenland, a region of Czechoslovakia inhabited by ethnic Germans.

He then used the same argument against Poland, which was home to 741,000 ethnic Germans, but Warsaw and its allies stood firm.

“In the few months preceding the outbreak of the war, agents of the Third Reich’s secret services launched efforts to create sabotage organisations,” noted Chincinski.

They recruited some 6,800 ethnic German agents and allocated them dozens of targets in Poland such as the farms of ethnic Germans, or offices of German-language newspapers and community organisations, in order to crank up tension.

“These attacks were to serve as proof of provocative Polish behaviour to international public opinion and to give Hitler a propaganda reason to begin a war with Poland,” he said.

The agents also carried out operations to hamper communications and sow panic ahead of the invasion, hitting railways, bridges and telephone lines.

The most spectacular attack took place on August 28 at a railway station in Tarnow in southern Poland, where a bomb killed at least 22 people.