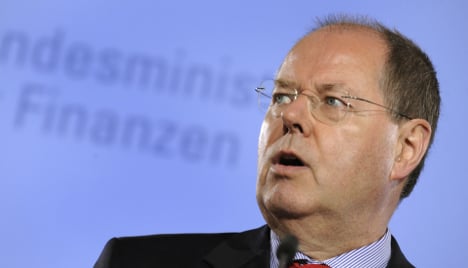 “The broad majority of our citizens who are not among those responsible for the crisis – now face enormous financial burdens,” Peer Steinbrück said in the letter dated August 27.

“It is therefore of central importance that we arrive at a fair distribution of the burdens arising from the crisis and, in particular, that we enlist those who triggered the crisis in the financing of these burdens as well,” he said.

“I would like to discuss with you how we can bring the financial markets to make a greater, internationally coordinated contribution to financing the immense burdens of the crisis.”

Steinbrück also said that he wants the G20, whose leaders are to meet for a summit in the US city of Pittsburgh on September 24-25, to take a “global approach” to do more to keep a lid on bankers’ bonuses.

“Excessive bonus payments, of the type that we have again seen recently, make it very plain that we need to take action,” he said. “These payments can scarcely be defended at a time when the financial system through the world has only survived thanks to huge levels of government support.”

He called for a cap on the share of bonuses in bankers’ pay packages, for stock options to be held for a minimum of four years, for a clear link between the pay of top management and a firm’s performance and for salaries to be published.

The issue of bonuses was expected to come up in talks later on Monday in Berlin between German Chancellor Angela Merkel and French President Nicolas Sarkozy.

Sarkozy, who has sought to position himself as a champion of financial regulation, said last week he would propose in Pittsburgh “a strengthening of sanctions towards banks that do not play by the rules.”

Last week Merkel said that she “of course” agreed with Sarkozy’s proposals, saying she was “angry that some banks are starting over again just like before.”

“This presents risks and this is why we should consider how we can intervene and limit” the bonuses, Merkel added, saying the issue would be a “central theme” in Pittsburgh.

Steinbrück also called on finance ministers to discuss international rules to facilitate the insolvency and liquidation of large banks in the event of another crisis.

He also said he would press for better international coordination on “exit strategies” from the massive stimulus efforts unrolled by governments around the world in order to avoid damaging inflationary effects in the longer term.

Steinbrück said as well that the G20 should also work towards a “clear and binding commitment” to reduce the huge deficits that have been built up in fighting the global recession.

He said efforts to reform financial regulation following G20 summits in Washington in November and in London in April were “encouraging” so far, for instance with closer supervision of rating agencies and hedge funds.

But he warned: “Now we must continue resolutely down this path, together resisting the temptation to return to business as usual at the first faint signs of recovery.”