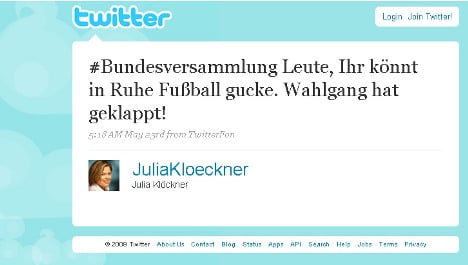 When German stations ARD and ZDF broadcast official exit poll results, the data was not significantly different than what had already been made available on Twitter.

None of the posts, commonly known as Tweets, cited their source, but it was information election officials said should not be available to the public.

“This is damaging democracy,” deputy parliamentary floor leader for Angela Merkel’s conservative Christian Democrats (CDU) Wolfgang Bosbach told Cologne-based daily Kölner Stadt-Anzeiger. “There is the danger that election results could be falsified. Therefore, these exit polls must be strictly monitored.”

Releasing election results before polls close is punishable by fines of up to €50,000 and officials may reportedly move to ban exit polls in order to keep election results out of the social media.

Sunday’s breach isn’t the first to rile German politicians. Officials reprimanded a CDU parliamentarian and the SPD’s floor leader in May after they tweeted the re-election of German President Horst Köhler before official results were released.

“Whether the information is sent out on a flier or on Twitter or broadcast on the radio, it is universally forbidden to broadcast results before the closing of the polling stations because of fears that information given too early will influence a voter,” said Ralf Burmester, a Hamburg-based media lawyer.

Jörg Schönenborn, chief editor for North Rhine-Westphalia broadcaster WDR, the local station responsible for providing election results to other state-run broadcasters, insisted that the station did leak the numbers.

“The claim that the data from our election researchers was posted to the web first is wrong,” he said. “I looked into the numbers and found no similarities with our internal data, which we had in the afternoon.”

Domestic policy expert for the Social Democrats Dieter Wiefelspütz encouraged consequences for the violation. “The legal possibilities must be fully utilised, this is simply a mess,” he told news agency DPA, adding that the situation could repeat itself during the federal election.

“We live in a time of high-speed communication – naturally early publication of prognoses can result in influencing the election,” he said.