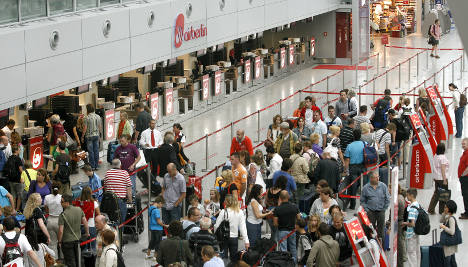 The strike, which began at 5:30 am, was called for pilots of Air Berlin, which includes company subsidiaries LTU International Airways and dba.

Meanwhile other crew members have been asked to participate in a “sympathy strike” between 5:30 am and 8:30 am, Cockpit said on Monday.

The airline flies between most major German cities and also favourite Teutonic vacation destination such as Mallorca. Early on Monday morning airports across the nation reported heavy delays and several cancellations due to the strike.

One flight from Munich to Mallorca was cancelled while flights from Düsseldorf, Cologne, Hamburg, Hannover, Saarbrücken and Stuttgart were delayed by several hours, airports reported. Other airports in Dortmund, Münster, Paderborn and Karlsruhe were also affected by the strike, which is set to last until 9:30 pm.

Negotiations between the airline pilots and employers have been running since January 2009, but collapsed in February. In March Cockpit members voted by a 98.7-percent majority to state strikes in their efforts to gain salary increases.

The airline said strikes were inappropriate given the economic situation of the air travel branch. Air Berlin has offered to increase 336 LTU pilots’ salary by two percent, in addition to an inflation adjustment and job security until the end of 2010.

But Cockpit wants a five percent raise for the pilots. Talks are scheduled for Tuesday.