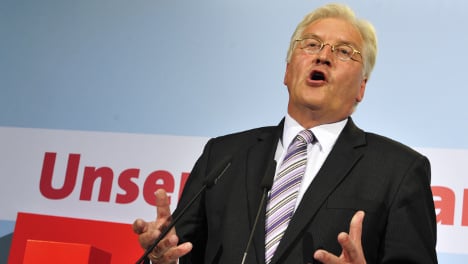 Just nine percent of voters expect Frank-Walter Steinmeier, candidate for the centre-left Social Democrats (SPD), to unseat Merkel on September 27, according to a weekend survey.

A whopping 87 percent predict she will win.

Crucially, polls also indicate that Merkel could ditch the SPD and form a new coalition with the business-friendly Free Democrats (FDP), whose score is currently around 14 percent.

But Merkel hit a bump in the road on Sunday after elections in three of Germany’s 16 states appeared set to lose the party power in two of them, Saarland and Thuringia. The conservatives held onto power only in Saxony.

Steinmeier, whose ability to attack Merkel has been hampered by the fact he is also deputy chancellor and foreign minister in the four-year-old “grand coalition,” was triumphant.

“What does this election night mean for the national election? Those who said that the election was already decided have made a big mistake,” he told cheering supporters at party headquarters in Berlin.

The results also came at the end of a bad week for Merkel, with the future of General Motors’ European unit Opel and its 25,000 German workers putting her on the defensive, in addition to a flap over a dinner for the country’s top banker.

“Steinmeier now has wind in his sails,” daily Neue Ruhr Zeitung said in an editorial on Monday.

But the aftermath of the state votes may also reap handy ammunition for Merkel, in particular the prospect of the SPD forming coalitions with the hard-line socialist The Left party, which scored over 20 percent in all three state votes.

Such a “red-red” tie-up in Saarland would be a first in western Germany, and the CDU would cite this as evidence that the SPD wants to run the whole country with Die Linke, a party which includes former East German communists.

Newspapers warned Steinmeier against getting too confident just yet.

The Financial Times Deutschland said that the CDU lost votes because the last state elections had been marked by a backlash against the government of SPD then-chancellor Gerhard Schröder, and because of local issues.

“Interpreting this setback (for Merkel) as a clear signal of a turnaround in the battle for Berlin in four weeks is wide of the mark,” the paper said.

“Trying to predict the outcome of the federal election from Sunday’s results is about as reliable as reading tea leaves,” the Handelsblatt business daily said.