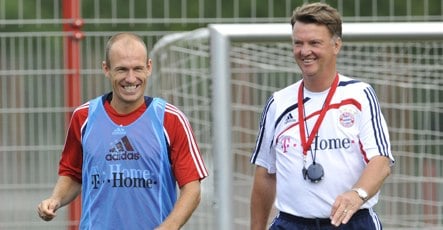 The 25-year-old Robben, one of several Dutch players being sold by the Spanish giants, signed a four-year deal with the stricken German giants, who have so far failed to make an impact in the league and currently lie 14th.

Robben trained with Bayern on Friday afternoon and could face Bundesliga champions VfL Wolfsburg on Saturday.

The former Chelsea player said that he was looking forward to playing for Bayern’s Dutch coach Louis van Gaal.

“He is a very good coach for me. He’s one of the few coaches today you can learn from as an individual player, so that was a very important thing,” he said.

With Cristiano Ronaldo blocking Robben’s path to the Real Madrid team, the Dutchman is expected to play a key role in helping Bayern get their stuttering season back on track.

The Bavarian giants have struggled to their worst Bundesliga start in 43 years having taken just two points from their first three games and were humbled 2-1 by minnows Mainz last Saturday.

Robben’s arrival would complement Bayern play-maker Franck Ribery, who is still a target of Real according to latest reports, and give the German giants more options in attack.