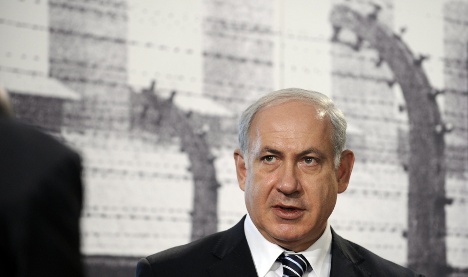 After talks with German Chancellor Angela Merkel, Netanyahu expressed hopes for a quick resumption of Middle East peace talks as he warned of a mortal threat to Israel’s survival posed by Iran.

“There is not much time” to halt Tehran’s nuclear ambitions, he told reporters. “I think the most important thing that can be put in place is what the US Secretary of State Hillary Clinton called crippling sanctions. It is possible to put real pressure, real economic pressure, on this regime if the major powers of the world unite.”

He said that even if the UN Security Council failed to approve tougher sanctions against Tehran over its sensitive nuclear work due to opposition from Russia or China, a “coalition of the willing” could enact its own measures.

Merkel told the same news conference that if Iran failed to meet international obligations by next month then “more serious steps” including energy sanctions would have to be considered.

Widely considered to be the Middle East’s sole if undeclared nuclear armed power, Israel suspects Iran of trying to develop atomic weapons under the guise of a civilian nuclear programme, a charge Tehran denies.

Israel considers the Islamic republic to be its main foe following repeated statements by President Mahmoud Ahmadinejad saying that the Jewish state is doomed to be “wiped off the map” and calling the Holocaust a “myth.”

Netanyahu and Merkel said they were convinced the time was right to jumpstart peace talks between Israel and the Palestinians. “I hope that in a timeframe of a month or two we can relaunch negotiations,” Netanyahu said.

“Let’s just get on with it. We have a big job to fend off the radicals and move forward.”

But Merkel echoed the US position that no progress could be made if Israel failed to halt construction of settlement in the occupied territories.

Netanyahu was on the second and final leg of a four-day European tour and his first stop in Germany since taking office in March.

“We cannot allow those who call for the destruction of the Jewish state to go unchallenged,” he said in a clear reference to Ahmadinejad. “We cannot allow evil to prepare the mass deaths of innocents. It should be nipped in the bud.”

The blueprints, which date from 1941-42 and include plans drawn with cool technical precision of a gas chamber and a crematorium, were discovered in a Berlin apartment last year and then bought by the Bild newspaper.

More than one million Jews, Roma and others deemed “subhuman” by Adolf Hitler’s regime were killed at Auschwitz, near the Polish city of Krakow, out of a total six million slaughtered by the end of World War II in 1945.

Netanyahu later visited a villa on the Wannsee lake on the outskirts of Berlin where senior Nazi officials adopted in January 1942 the “Final Solution” – plans to exterminate all Jews in Nazi-occupied Europe.

Netanyahu, who described the visit to Wannsee as “emotional,” became the first Israeli prime minister to visit the site’s museum which was opened in 1992 on the 50th anniversary of the “Final Solution” conference.