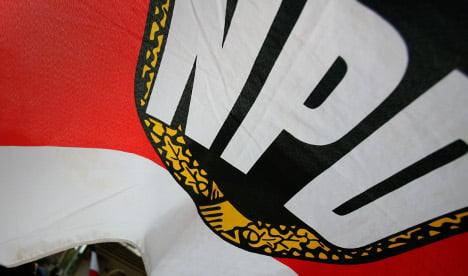 The final stages of the campaigns in Saxony, Thuringia and Saarland have exposed the NPD’s unvarnished xenophobia in recent weeks. The neo-Nazi party hopes to gain seats in all three state legislatures after winning an unprecedented 10 percent of the vote in the last Saxon poll four years ago. Emboldened by that success, the NPD has pulled few punches this time around, including mounting a racist campaign against a black member of the conservative Christian Democrats (CDU) in Thuringia and hanging anti-Polish posters in Saxon border town of Görlitz.

Peter Leveringhaus from the DDP news agency spoke to Christian G., a former German neo-Nazi, to discuss what mainstream political parties can do to contain the spectre of an ascendant far-right. The 30-year old man left the scene behind with the help of the organisation “Exit Deutschland” after several years of involvement with extremism.

Leveringhaus: Are the attacks against the Angolan-born CDU politician Zeca Schall in Thuringia, calling him an “Token Nigger” and telling him to “go home,” really exceptional, or do these fit the pattern of right-wing extremism during election time?

Christian G.: This is exactly the kind of brutal jargon that the NPD often uses these days, especially after the break up its “Germany Pact” with the slightly more moderate German People’s Union (DVU). Radicalising is calculated to lure frustrated, politically irritated and lowbrow voters.

After this particular incident, there was an NPD election tour of parts of Thuringia in which an NPD activist was coloured with blackface makeup, wore a curly-haired wig, carried a banana plant while wearing a slogan around his neck reading “emigrate, don’t immigrate” (Heimreise statt Einreise”). This is a coldly calculated escalation.

Leveringhaus: What should the mainstream parties do to tackle right-wing extremism?

Leveringhaus: Are they not doing anything at the moment?

Christian G.: The mainstream parties have no presence in eastern German states outside of election time. It has been this way since the reunification of the country. When there is an incident involving right-wing extremists, there is great public outcry for two weeks across the country – the same old politicians pipe up about it. But then everything is quickly forgotten.

Leveringhaus: Unfortunately, this is a well-known ritual…

Christian G.: But the main parties don’t seem to understand that the NPD is always present in the east, including once the public outrage in such cases has calmed down. The far-right bases everything around idealism, sacrificing their time and money for the party: they organise holiday activities, football tournaments, stuff radical right-wing newspapers in people’s letter boxes, especially in areas where people can’t, or don’t want to, afford a normal daily newspaper.

In Anklam for example, a stronghold for the far-right (in Mecklenburg-Western Pomerania), only around 20 percent of the population subscribe to newspapers. The far-right distributes CDs, they carry heavy bags for old people – and all of this for free. And we still wonder how the NPD gains support in these areas…It makes an impression on people. If the other parties, the democratic parties, really feel that they cannot play to this idealism, and if they can’t afford the grass-roots activity of the NPD, then they might as well forget democracy altogether.

Leveringhaus: But people do realise, for example, what is really being said in free neo-Nazi newspapers.

Christian G.: No. There in the east the NPD cadre, most of whom come from the west, make sure that the language in such brochures sounds very different from what we might expect.

Christian G.: Ideas like “socialism,” “social,” “collective,” or “community” are always popping up in these publications. These are all words which the older generation recognise from the time of communist East Germany. It suggests familiarity in the language – especially for those who dismiss or criticise the reunified Federal Republic of Germany today.

Leveringhaus: How does the NPD influence younger people outside of election time?

Christian G.: They act in ways which make them unrecognisable as neo-Nazis, neither in appearance, nor in language. They are inconspicuously clothed, don’t have the typical hair cut, and want to come across as nice and kind. They talk about globalisation, social injustice, protecting the environment . There were even right-wing extremists at the demonstrations held during the G8-summit in Heiligendamm.

Leveringhaus: And when they keep digging and ask about the Nazi era?

Christian G.: Then they go quiet, and refuse to comment. But there is no agitation. Their contact with the public is protected by that. None of them can get angry. They want to be in the middle of society.

Leveringhaus: A study by the website jugendschutz.net recently revealed the great importance of the internet as a propaganda platform for the far-right. Is the use of the internet, in your opinion, a problem?

Christian G.: It is the most important, and biggest mouthpiece, for the far-right. On social websites like StudiVZ and MySpace they are active in a lowkey fashion, luring the clueless. Moreover, the internet is the perfect arena for contact between right-wing extremists. Here important arrangements can be made, and actions coordinated – all under the protection of anonymity.