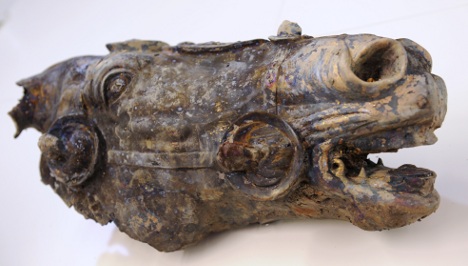 “The find has meaning beyond Hesse and the north Alpine region due to its quality and provenance,” Kühne-Hörmann said during the presentation with state archaeologist Dr. Egon Schallmayer and Director of the Roman-German Commission Dr. Friedrich Lüth.

“We’ve rediscovered the remnants of early European history. The unique horse head is a witness to the broken dream of the Romans to create a united Europe under their rule,” she added.

Click here for The Local’s photo gallery of the find.

On August 12, archaeologists pulled the gold-gilded, life-sized head of a horse and a shoe of the emperor – who ruled the Roman Empire between 23 BC and 14 AD – from a stream in what was once the Roman outpost Germania Magna. Experts there have uncovered several bits – including a horse hoof and a decorated chest strap – from the statue among some 20,000 artefacts uncovered at the site in recent years.

Scientists from the University of Jena believe it may have been destroyed by Roman soldiers retreating after the legendary Varusschlacht, or the Battle of the Teutoburg Forest in 9 AD, when Germanic tribes ambushed and wiped out three Roman legions. As the remaining Roman troops retreated after the devastating defeat, they destroyed most of what they could not take with them.

The horse’s bridle is embellished with images of the Roman god of war Mars and the goddess Victoria, who personified victory.

Restoration and examination of more than 100 statue fragments is underway in Hessen’s state archaeology workshop.