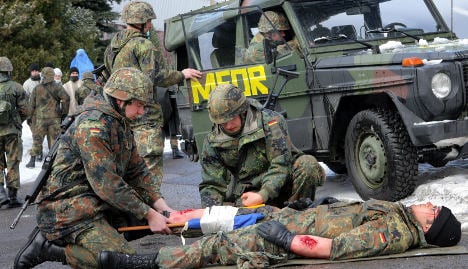 The Afghan village elder’s home is actually a German town hall, the mosque is a ramshackle farmhouse and the devout woman in the burka is really a German soldier.

Welcome to Lengefeld, a remote mountain town in ex-communist East Germany that has been transformed into a training ground for soldiers who will join the around 4,000-strong German force in increasingly violent northern Afghanistan.

And for the first time, German locals have been enlisted to play a part in training lessons on reconnaissance, security and winning hearts and minds.

The United States and Britain have gone as far as to build entire training villages complete with real Afghans to help their troops get acclimatised. But the German programme is unique for using local civilians as stand-ins.

The Dingo is emblazoned with warnings in Dari and German for other vehicles to keep their distance.

They barrel past the Morning Star Bakery, the kebab shop, the Lutheran church and pensioners taking their daily stroll through the town of about 5,000 people.

No one seems particularly surprised to see this display of military might, although a few wide-eyed schoolboys look on admiringly as the soldiers scout the territory for potential hazards.

“Of course you cannot compare the Erz Mountains to the Hindu Kush” in Afghanistan, unit commander Captain Frank Schedel from the 3rd company of armoured infantry battalion 371, told AFP.

“But that is not the point of this exercise – we are trying to give soldiers a chance to approach people they do not know, start conversations with them and orient themselves in a place that is unfamiliar. Most of them know the base like the back of their hand but not Lengefeld and its surroundings.”

Schedel said that as Germany’s NATO mission has grown more dangerous – 35 soldiers have died since their deployment in 2002 – they have grown increasingly dependent on strategic information from locals.

Understanding potentially explosive issues such as who has control over the local water supply can be crucial for foreign troops trying to build alliances as they assist in the reconstruction of the war-ravaged country.

In the exercise, the entire company makes its way to the swimming pool – a “freshwater pond” where the village elder is joined by an ally and the man’s “wife” in a sky-blue burka, trailing a few paces behind.

Only the scuffed boots peeking out below and the burly frame underneath point to “her” actual identity.

At the pool, splashing children pause for a moment while the soldiers march through in full combat gear.

Lieutenant Rene Voigt, 26, quizzes actual pool manager Bertram Trenkler about the water quality at the site, other sources of potable water and whether there has been any fighting over the water supply.

Trenkler, 43, plays along in an unscripted dialogue, divulging or withholding information as he pleases, as children dive-bomb into the pool behind him.

He said that although some of the scenes can seem quite comic, he understands they are deadly serious.

“I think knowing about the social make-up of a place can be a major security bonus,” he said. “By talking to us in Lengefeld, they get to practise that kind of thing.”

The exercise includes a role play at the town hall where a soldier stands in for the village elder.

Lieutenant Voigt enters the “home” with a staff sergeant and attempts to engage the elder in small talk over tea but a few missteps risk bringing the conversation to a quick and unpleasant end.

Voigt correctly left his rifle outside the elder’s home as a sign of respect for his authority and his guarantee of the soldiers’ security.

But the staff sergeant left his sunglasses on and drank his tea with his left hand — serious faux-pas that reveal ignorance of local customs which dictate that the right hand is used for eating and drinking.

Voigt also charges ahead in the conversation, forgetting that chats like these tend to take a more leisurely pace or the elder will feel snubbed.

His officers also advise Voigt to stress his large extended family rather than say he is single with no children – a nod to the central importance of the family in Afghan life.

Voigt’s rather stiff approach gradually loosens up, allowing a rapport to develop.

“We generally do our exercises at the base but this is the first time we’ve tested out what we’ve been learning in a town and seen the reaction of the locals to us and our heavy weapons,” he said.

“Some people are happy to see us, some say they’d rather not have us here – a little like in Afghanistan, I guess.”