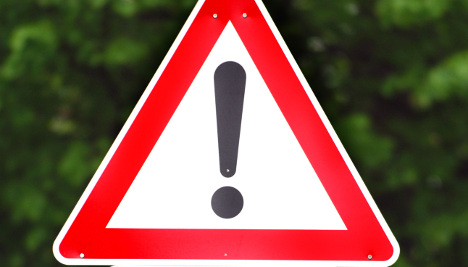 One of The Local's favourite German road signs. What does it mean? Photo: DPA

The development has made residents of the street anxious because they don’t know what his plans are, daily Berliner Morgenpost reported on Wednesday.

Wassim Saab, who owns a translation business in Berlin’s Wilmersdorf district, discovered online that the town planned to auction off the street for the symbolic sum of €1 after the original developer went bankrupt.

“We didn’t anticipate a fellow bidder,” building authority head Christiane Neumeister told the paper about the auction two weeks ago. “There we made a mistake.”

Inside the auction hall were only Saab, Neumeister and the head of the nearby community of Beetzsee’s building authority – who was supposed to buy the 5,200-square-metre street for €1 and take control of the road.

But minutes later she watched helplessly as the street – including street lamps and water pipes – was awarded to Saab. According to the paper, she brought just the symbolic €1 to the auction and it did not occur to her to increase her bid, though Havelsee’s Mayor Günter Noack told the paper she was authorised to do so.

“I still need to think about whether I will sell the street or charge fees for the irrigation and drainage,” Saab told the paper, adding that he will not “unduly stress” the some 100 residents nearby.

The housing development street is in the Briest district of Havelsee and was built in the 1990s by investor Ulrich Pietrucha, who had long been offering it to the city for €1. A corresponding contract was already at the building authority, but no one had addressed it due to reported damage to the street and the €100 to €200 notary fee it would have required to process.

“But the women thought they were clever and thought they’d get the street for one euro,” investor Pietrucha said.

Their thrift could end up costing the town of Havelsee dearly. Residents could now sue for government liability of the new owner charges them extra fees.

Pietrucha told the paper the city must buy the street back from Saab – but experts estimate the true worth could be up to €500,000.