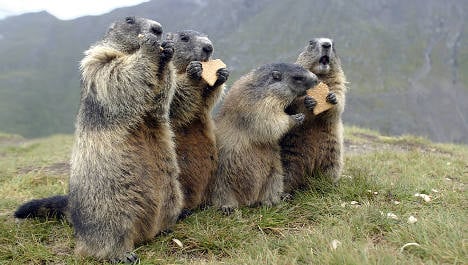 “There are simply too many,” Christoph Brutscher told German daily newspaper Die Welt on Tuesday.

Brutscher lives near the Zipfsalpe, right on Germany’s southern border with Austria in the region of Oberallgäu of Bavaria. While his grandchildren say the whistling rodents “live here with Grandpa,” Brutscher wants to get rid of them.

“For those of us living in the Alps, they have become a real plague,” he said.

Marmots (Marmota marmotini) thrive at high altitudes and at 1,526-metre the idyllic Zipfsalpe peak fits the bill perfectly were it not for the predators. As the region’s eagle population recovers and grows, the marmots are seeking refuge in nearby alpine huts.

“The marmots are advancing on the huts because they are being hunted by the eagles. Many of those buildings now have an awful stench to them,” said Peter Danks of the Alpine business association of Allgäu.

In neighbouring Austria, cattle farmers are allowed to hunt the rodents that come too close to their property. But in Germany the marmots are still protected.

And this is unlikely to change while the complaints about marmots remain few and far between. Gottfried Mayrock, head of the Oberallgäu district office for environmental protection, is hesitant to call the existing marmot population a plague.

“There are occasional complaints from Alpine residents about the marmots but it does not yet seem to us that the population is out of hand,” he told Die Welt. He recommends that the farmers scare away the rodents with strange smells, such as a diesel-soaked rag. “When they notice a foreign smell in the building they continue searching for shelter.”

As well as invading homes, the marmots have pocked Brutscher’s land with their burrows, which can be up to one metre deep.

“In the last five years, three of my cattle have broken their legs by stepping into one of their holes. One has to wonder how it doesn’t happen more often,” he said, adding that the injured animals all had to be helicoptered into the valley and euthanised.

“In the areas around the buildings, people should be able to shoot them. There they are only making the lives of people difficult,” said Danks.

For now, only farmers with special permission can shoot marmots and that is only granted on a case-by-case basis, said Mayrock, adding that the rodent has to have caused property damage by burrowing into someone’s home.

In the winter, when the marmots go into hibernation, people must also leave the critters alone.

Found all over the world at high altitudes, many Marmots are known for their distinctive whistle call. Some regional names for them include ground hogs and whistle pigs.