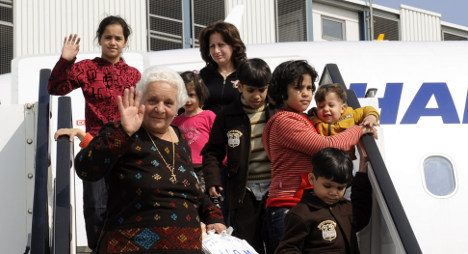 A file photo of the last group of refugees to arrive in Hannover. Photo: DPA

The flight, coming from Syria where many refugees have gathered, will be the eighth such transport organised by the International Organisation for Migration to arrive in Hannover.

The asylum seekers are mainly from Iraq’s threatened Christian religious minority, many of them single mothers and ailing refugees who have stayed in Syria and Jordan after fleeing Iraq.

The UN Refugee Agency has already brought 1,003 Iraqis to Germany, where they will receive three-year residency permits. The country has agreed to take on a total of 2,500 such refugees, the first of whom arrived in March.

Iraq was torn by insurgency and sectarian strife after US-led forces invaded in March 2003 to oust Saddam Hussein. About two million Iraqi refugees currently live in Jordan and Syria.