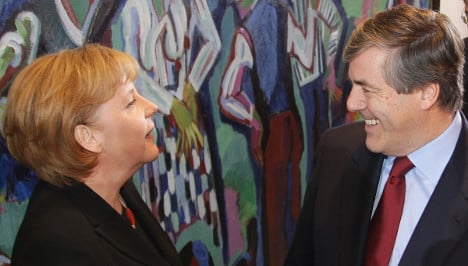 The parliamentary budgetary committee plans to address the exact circumstances of the bank executive’s 60th birthday dinner celebration put on by the Chancellery later this week.

“It is pretty borderline,” Social Democratic (SPD) budgetary expert Johannes Kahrs told the paper. “Mrs. Merkel should have been a bit more sensitive here. The Chancellery is not an event agency and least of all at the cost of taxpayers.”

In the midst of the national election campaign highlighting the cracks in Merkel’s right-left coalition of Social Democrats and her conservative Christian Democrats, Kahrs demanded clear reports on the event’s costs and information on any other similar events that may have been hosted by the Chancellery.

Ackermann apparently appeared on a television show about Merkel saying she had offered to host him and 30 friends at the Chancellery because she wanted to do something nice for him.

“It cannot be that Mr. Ackermann invites guests to the Chancellery and the taxpayers bear the costs. We aren’t a Banana Republic,” Kahrs added.

The Chancellery already confirmed it had hosted Ackermann’s festivities in April in response to an inquiry from The Left party MP Gesine Lötzsch.

But on Monday a government spokesperson told news agency DPA that the event was not a birthday celebration, but a dinner for business and science leaders.

“The costs were financed through the Chancellery budget, which is available for these purposes,” the spokesperson said, adding that Ackermann’s birthday is in February.

The taxpayers’ union BdSt head Rainer Holznagel told daily Handelsblatt on Monday that the criticism is unfounded and stands on “very wobbly legs, because the event at the Chancellery had no private character.”