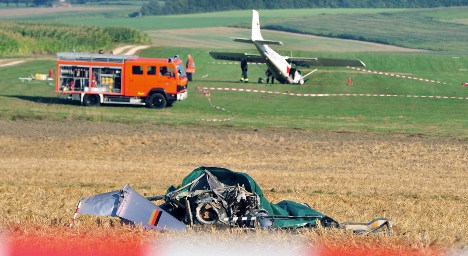 Both accidents occurred in the state of Baden-Württemberg. Four people were killed when a Cessna collided with a helicopter at an Ellwangen airfield festival, and another two people died in a crash near Fronreute.

In Ellwangen, the Cessna 172 model plane and the R 44 helicopter were both attempting to land when they collided at a relatively low altitude, investigators said. The accident occurred around 3:20 pm just a few hundred metres from the festival, though none of 1,000 attendees were in danger, police said.

The helicopter dropped some 500 metres from the landing strip and erupted into flames and the Cessna flew a bit further before crashing.

An eyewitness reported seeing the two aircraft come “very close” before he lost sight of them and heard a loud explosion.

Both aircraft were part of the airfield festivities. The helicopter had been taking guests on tours of the region, while the Cessna was on its way back to the airfield after dropping parachuters over the show.

Meanwhile in Fronreute a 62-year-old pilot and his 54-year-old passenger died around 2:35 pm on Sunday when their ultralight aircraft broke apart just a few minutes after taking off in Berg. Bits of the plane tumbled to the ground, spreading across one kilometre.

Authorities are baffled about the cause of the crash, as both plane occupants were experienced pilots with many years of experience. There was no explosion or fire in the plane before it crashed.