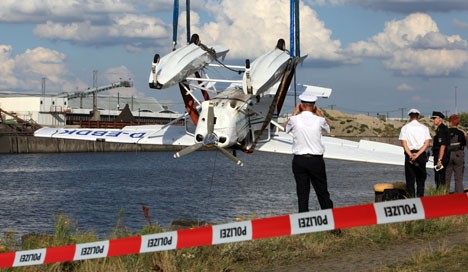 The plane apparently overturned as soon as it hit the water, obviously after not approaching a landing properly a police spokeswoman in the northern German city said.

It was not known whether the plane was due into Hamburg or whether the pilot was forced to make an emergency landing.

He managed to escape from the submerged cockpit, uninjured but in a state of shock. The two passengers were not able to get out by themselves. Rescue divers were deployed to pull them from the plane and medical teams tried to resuscitate them en route to hospital.

But the 52-year-old woman died shortly after arriving at the hospital while her husband died a few hours later. They were reportedly visitors from Bremen.