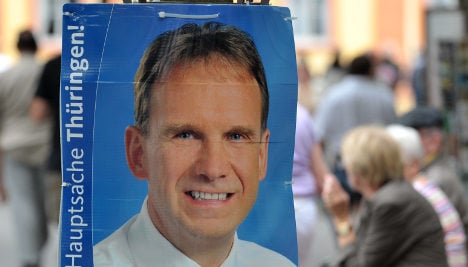 The Christian Democrat, who is campaigning to remain in power in the state election on August 30, has infuriated Beata Christandl’s family by discussing her death and his feelings about it in the campaign.

Alexander Rehrl, lawyer for widower Bernhard Christandl, told the daily Süddeutsche Zeitung on Saturday, the two men had agreed to a pact of silence.

“Absolutely no details about the accident or the continuing negotiations about compensation,” will now be discussed in public, he said.

This included Althaus agreeing to stop talking about his visit to Christandl’s grave or other details which might affect the family.

Althaus has given several interviews to tabloid newspapers recently in which he talked about having prayed at the grave of the Christandl, and having developed a friendly relationship with her widower.

She died after a collision with Althaus on an Austrian ski slope on New Year’s Day. Althaus, who was wearing a helmet, suffered serious concussion.

An accelerated Austrian court process found him guilty of negligent homicide and fined him €33,300 plus €5,000 compensation.

The civil case between the Christandl family and Althaus is still on-going, and is expected to cost the minister president more, as the dead woman was the mother of a young son.

Althaus has been heavily criticised for his discussion of the accident during the election campaign. His rival, the Social Democratic Party candidate Christoph Matschie accused him of “cold-heartedly exploiting the tragic accident for election campaign purposes.”

Christandl’s lawyer Rehrl has also said that his client found Althaus’ interviews disrespectful and an abuse of trust. Under the agreement, his comments will now also stop.

Althaus would not comment on the agreement, telling the Süddeutsche Zeitung, “The lawyers have talked with each other, I cannot say anything about what it was.” When asked, he declined to talk about the accident.