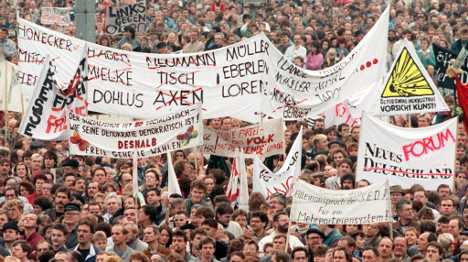 The campaign in Plauen is part of a nationwide movement to establish memorials to the demonstrations against the communist East German regime in 1989.

At the end of 2008, the German parliament, the Bundestag, established a competition for a “national freedom and unification memorials.” After planning a memorial for Berlin, further plans were drawn up to establish a memorial in Leipzig, home to the famous “Monday demonstrations” against the East German government between 1989 and 1990, but Plauen was not mentioned.

The city reacted with their own proposal for the creation of a memorial to the protest of October 7, 1989. Activists in Plauen rallied some 15,000 town citizens, approximately a quarter of the population at the time, to take to the streets demanding freedom of press and the right to travel abroad.

This demonstration took place two days before Leipzig’s first “Monday demonstration,” which sparked a series of peaceful Monday night gatherings in city centres across East Germany as the government began to crumble.

While the Bundestag’s €15 million memorial plan for Berlin and Leipzig memorials have been put on hold due to more than 500 unacceptable contest entries, Plauen hasn’t raised enough donations for their €60,000 monument.

Nine artists have drawn up 14 blueprints to erect a “memorial of lasting value for the courageous citizens, for all to understand,” and construction is set to begin on October 7 despite having only €28,240 thus far.

Plauen Mayor Ralf Oberdorfer explained that the Wall anniversary presents a “good point in time” to commemorate the role of the town in the fall of East Germany.

“The wheel of history had a special momentum here,” he said.

But party leader for the hard-line socialist Left party in the city’s parliament, Wolfgang Hinz, said residents had “other concerns” such as unemployment.

Former city superintendant Thomas Küttler, who took an active part in the 1989 protest, was also sceptical of the project.

“Twenty years is a very short time to warrant a memorial,” he said.