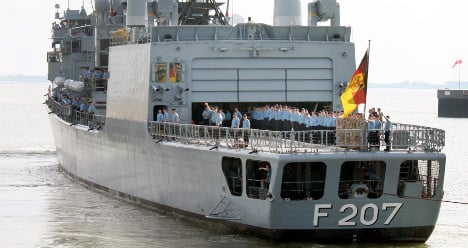 Officers found AK-47 assault rifles, explosives, and anti-tank weapons on the boat in the Gulf of Aden, where they were sent as part of the European Union’s Atalanta mission to fight piracy in the region.

Because the Bundeswehr could not prove the six-occupants of the boat had committed an act of piracy, their boat was returned to them with just enough fuel to return to shore.

The find came after the German ship thwarted a pirate attack on a Turkish freighter last Friday.

Christian Schmidt, Germany’s parliamentary liaison on defence issues, told the daily Passauer Neue Presse on Thursday that the Bundeswehr will likely continue their service in the region for at least two more years, or “as long as international ships are endangered by pirates around the Horn of Africa.”

But efforts to stop attacks won’t be sufficient to solve the problem, he said.

“The ills need to be stopped at their roots, and they are on land,” Schmidt told the paper, adding that Somalia’s lack of state authority needed to be addressed with development help and police training.