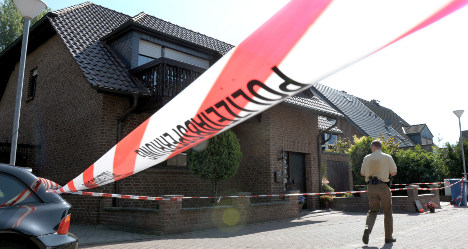 The 71-year-old shot dead on Tuesday two lawyers, 38 and 70, and a surveyor, 48, who had come to discuss the sale of a house in the town of Schwalmtal as part of a divorce settlement between the gunman’s daughter and her ex-husband.

“According to the suspect’s statement, he loaded his pistol with seven bullets, reloaded it and then shot the victims again. This was, he says, to make sure that they were dead,” Düsseldorf police chief Jürgen Schneider said.

“According to his statement, he wanted to punish the people who were delaying this whole affair … He wanted to make clear to people not to mess with him and his family,” Schneider told a news conference.

Hundreds of police including masked commandos surrounded the house, and after three hours he surrendered by waving his white shirt at an upstairs window.

A second surveyor, a 40-year-old woman, was shot twice but survived. She was in a stable condition in hospital on Wednesday, and well enough to give a statement to investigators, Schneider said. The pensioner’s daughter, 44, and two other people also in the house were unharmed.

Pictures showed the grey-haired pensioner being taken to a police van by masked commandos with his hands behind his back. The Bild newspaper reported that the man had been on trial in 2006 for attacking two people with a baseball bat.

The shooting brought back memories of the bloodbath unleashed by 17-year-old Tim Kretschmer, who shot dead nine pupils and three teachers at his old school, as well as three bystanders in and around the town of Winnenden in March.

Peter Aldenhoff from the public prosecutors office said he expected the man to be remanded in custody later on Wednesday and charged with murder, although this might be delayed because of his health as he is a diabetic.

“I think it was meant to be me,” 44-year-old Hubert K., who had recently divorced from the pensioner’s daughter, told rolling news channel NTV. “He didn’t want me to get anything (from the sale of the house), from my property, which was mine.”

“He hated us because my dad split up with my mum,” the pensioner’s grandson Christian, 18, told Bild. “He wanted at all costs to prevent the house being auctioned. I believe the attack was meant for me and my father.”

The pensioner stuck his tongue out at his wife’s ex-husband and his grandson as he was whisked away by police, Bild said.