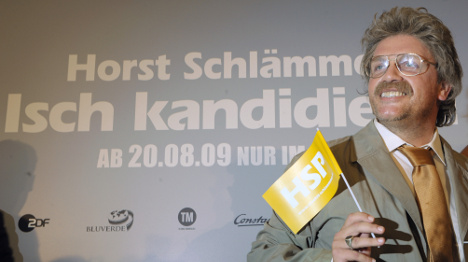 Like British comedian Sasha Baron Cohen’s alter-egos, the outrageous gay Austrian fashionista Bruno, or fictitious Kazakh journalist Borat before him, Schlämmer has shot to fame by mocking the world around him, in this case the usually staid environment of German politics.

Describing his “Horst Schlämmer Party” (HSP) as “conservative, liberal, left-wing and a bit ecological,” he has clearly struck a chord with Germany’s voters with “manifesto” pledges of state-funded sunbeds and cosmetic surgery.

Turned off by the uninspiring campaigns waged by leading candidates Angela Merkel and Frank-Walter Steinmeier, nearly one in five Germans said they would consider voting for him if his name were ever to appear on the ballot paper, according to a recent poll for Stern magazine.

And belying their humourless reputation, Germans recently voted the goofy character the country’s most popular person, ahead of former tennis star Steffi Graf, the Pope and football supremo Franz Beckenbauer.

As for his “politics,” Schlämmer is scrupulously honest but not exactly politically correct.

He told a press conference in early August: “Politically speaking, I find homosexuality ok. Privately, I find it disgusting” – all the more ironic as Kerkeling is gay.

And he certainly has a politician’s instinct for grabbing the limelight.

When Michael Schumacher announced he was shelving his planned Formula One comeback, Schlämmer immediately offered him alternative employment: “Schumi can drive me to the premiere of my film,” he said in a press release.

The film, “Isch kandidiere!” (I’m a candidate!) opens on Thursday and is set to be a huge success if the premiere is anything to go by, with hundreds of fans crammed into Berlin’s Potsdamer Platz to catch a glimpse of the unprepossessing star.

He appears relatively unconcerned about the main political issues of the day. “The financial crisis? I tell you this now, honestly, I have no solution,” and “Swine flu? I’m against it!”

But the anti-politician, who, like “Ali G,” another Sasha Baron Cohen invention, conducts mock debates with real-life political figures in the film, has attracted the kind of media coverage other politicians can only dream of.

Over 200 journalists packed out his first press conference where he presented his party’s “manifesto” and rolling news channels N24 and NTV both carried it live for almost two hours.

Among his more radical suggestions was a proposal to scrap federal Germany’s famous Eagle symbol and replace it with a bunny rabbit.

The day before, both channels had cut away from Steinmeier presenting his real-life manifesto – a plan to create four million jobs by 2020.

And Steinmeier might just be envious of Schlämmer’s poll ratings, with a recent survey suggesting only nine percent of Germans think the Social Democrat front-man will be the next chancellor.

But Schlämmer is not the only one spicing up Germany’s dull election campaign.

Another mock party, called simply “The Party,” is fighting a ruling banning it from the September 27 poll with its policy of rebuilding the Berlin Wall and expelling all the country’s pensioners to the formerly communist east.

Meanwhile parliamentary candidate Vera Lengsfeld, from Merkel’s CDU party, caused a stir after mocking up a campaign poster showing her and the chancellor wearing low-cut dresses that left little to the imagination.

Media and political commentators put the success of the satirists down to the lacklustre campaigns run by the main parties, as well as a lack of genuine political confrontation due to the “grand coalition” governing Germany.

“Schlämmer is an alternative to your usual grey-suited politician in Germany,” Gero Neugebauer, a political scientist at the Free University in Berlin, told AFP.

“I can imagine people are fed up with politics and politicians … the boring campaign makes Schlämmer more interesting,” he added.

Germany’s influential news weekly Der Spiegel commented in a recent online editorial: “There is an election battle and no one wants to participate. If it weren’t for Horst Schlämmer and Vera Lengsfeld’s breast campaign, most people wouldn’t even notice.”

Neugebauer said many people who said they could vote for Schlämmer were perhaps registering a “protest vote” against mainstream politics.

And he concluded with a point that German politicians of all parties – real and satirical – might agree with.

“Better Schlämmer than the fascists.”