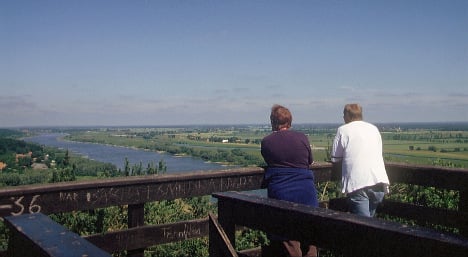 I want my curtain back! Photo: DPA

Some 100 kilometres south of Hamburg, lies Hitzacker: a picturesque part of what was once West Germany on the banks of the Elbe River. Now billing itself a centre for wellness tours, during the Cold War the town was home to a very different tourist attraction – the imposing border with communist East Germany.

Looking out from the town’s Waldfrieden Hotel, many could easily forget that the river at the centre of its idyllic view once split the country in two. Even the town mayor, Karl-Heinz Jastram, has a personal story to tell of the impact of Germany’s four decades of division.

“The Elbe didn’t just divide the country, but, like the Berlin Wall, it divided families too. My grandparent’s house stood just over there on the other side of the Elbe in Herrenhof. I used to have to travel to official checkpoints just to see my cousins.”

But for this northern German town, the heavily fortified border was also a huge tourist magnet. But those visitors and the money they brought with them are long gone. And that leads Mayor Jastram to say despite his sad personal experiences: “Cynically, the reunification of Germany brought us nothing.”

“Of course we’re happy that the Elbe is free again, but, economically speaking, we haven’t profited from the changes.”

He recalled more than 20 bus-loads of tourists each day, coming to the town for a glimpse of “life on the other side” on “border tours” – a phenomenon echoed in the memory of Michael Hewerkl, owner of the local hotel: “Everyone wanted to see the border. Tourists were transported by boat down the Elbe to get as close to it as possible.”

But overnight nearly twenty years ago, this all changed – the watchtower was pulled down and bookings dropped 30 percent, according to Hewerkl.

“So we turned to ‘wellness’ tourism, and now have a completely different clientele,” he mused.

The town is keen, however, to revive interest around its place in recent history. The local museum is organising an exhibition to commemorate the twentieth anniversary of the reopening of the borders between east and west.

“When the country was divided, we were right on the border,” museum curator Klaus Lehmann said. “Today we are right at the centre of Germany.”

Hitzacker is also doing more than pepping up its museum to boost tourist interest – it’s built a new wall. Following three devastating floods in five years, a new concrete barrier was raised to protect from the river’s waters. The town’s boosters now hope its high-water markings show the force of Mother Nature might become a new tourist attraction.

“We never had a wall when Germany was divided, but we have one now,” Jastram quipped. “People need a touch of the sinister to find something interesting.”