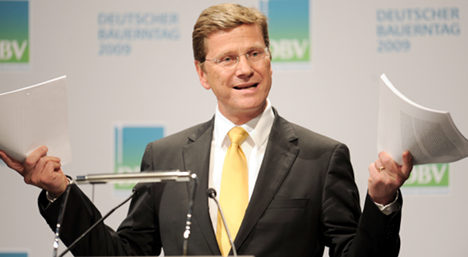 FDP head Guido Westerwelle said the Social Democrats, who currently govern in an increasingly uncomfortable coalition with the rival centre-right Christian Democratic Party, are not a suitable coalition partner when a new government is formed after the September 27 elections.

The SPD are “used up, splintered and not fit for governing,” Westerwelle told the newsweekly Der Spiegel.

“If a cow grew wings, then it can fly and it’s a bird,” said Westerwelle, rating the chances of a coalition at nil. Westerwelle has often said in the past that he hopes to join a government with the CDU, which as the junior coalition partner would make him the new Foreign Minister by long-standing German political tradition.

Westerwelle’s comments may be the final nail on the coffin for the SPD’s hopes to remain in power after September.

With the SPD’s opinion poll ratings at record lows, the only way the party can stay in government is to either continue its coalition with the CDU, which is unlikely given that CDU Chancellor Angela Merkel has said she would prefer to govern with the Free Democrats, or to build a new coalition with the FDP and the Greens.

The grouping is known in German politics as a ‘stoplight’ coalition because of the of the respective party colours in the potential coalition.

Westerwelle’s bravado at rejecting the SPD is backed up by the opinion polls. The latest Forsa poll last week showed the CDU and FDP gaining a combined 51 percent share of the vote, enough to form a government.

The SPD’s candidate for Chancellor, current Foreign Minister Frank-Walter Steinmeier has struggled to gain traction as the election campaign enters its peak stage.

Merkel was buoyed last week by news that Germany had exited its deepest recession since World War Two and will surely try to take credit for the economic recovery.