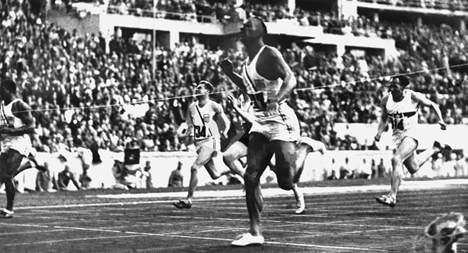 Jesse Owens became one of the most iconic figures in sporting history when he competed at Berlin’s Olympic Stadium when the games were hosted in the German capital in 1936.

Flying in the face of Adolf Hitler’s Nazi propganda that the Aryan white race were superior to coloured athletes, Owens won an unprecedented four gold medals in the 100m, 200m, 4x100m relay and long jump.

The sprinter died of lung cancer aged 66 in 1980, but all United States athletes here will compete in uniforms with the sprinter’s initials embroidered on their kit.

A grand-daughter of Owens, Marlene Dortch, has also joined up with the US team and will be involved in ceremonies honouring the American icon.

“I’m very excited to see the stadium where my grandfather competed,” she said. “Just to be able to be a part of such a great moment is an honour for me and my family. I’m very humbled and excited.

“I’m thankful that his legacy and his name lives on,” Dortch said.

“I hope that just having his initials on their kit will inspire some of the athletes to remember this time so many years ago.”

Owens, born James Cleveland Owens, the seventh son of a sharecropper and grandson of a slave, achieved what no Olympian before him had accomplished in winning four golds – a feat only matched by fellow American Carl Lewis in 1984.

His stunning achievement to dispel the Nazis’ master-race theory ironically came at a time when blacks were subject to segregation and discrimination in many parts of the United States.

But for Owens, the Olympics were never about making a political statement.

“I wanted no part of politics. And I wasn’t in Berlin to compete against any one athlete,” Owens once recalled.

“The purpose of the Olympics, anyway, was to do your best. As I’d learned long ago from (former coach) Charles Riley, the only victory that counts is the one over yourself.”

“I am so excited about running to be running in the same stadium where he did such an amazing job in 1936,” Lagat said.

“For me, he opened a lot of doors not just for American athletes, but people all over the world and that is why it is a great message that we are coming here to celebrate his life.

“I am looking forward to wearing the uniform with the JO on it.

“That is his legacy and we have to live up to that, we have to give something back to a great legend.”

Allyson Felix, an Afro-American and reigning 200m world champion, added: “It’s an honour and definitely a privilege to run here.

“I feel Jessie Owens paved the way for us and I feel extremely grateful to him for this opportunity to do what he did.

“It was such an amazing achievement and he was a class act off the track as well, he is a role model and someone I look up to and it’s all the more special to be back here in Berlin and to run as well for the US as he did.”