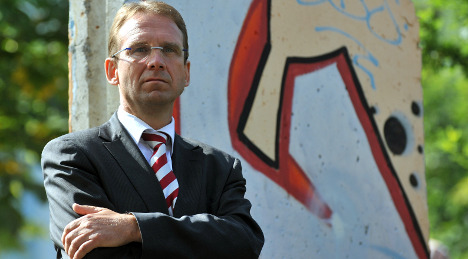 Althaus in front of the Berlin Wall. Photo: DPA

Althaus, a member of Merkel’s conservative Christian Democratic Union (CDU), is the first premier from a state in Germany’s formerly communist eastern half to moot the possibility of ending the so-called Solidaritätszuschlag.

Introduced in 1991 shortly after German reunification, the Soli has long been off limits for politicians afraid to alienate eastern voters. But Althaus said the surcharge could be nearing the end of its two-decade existence should the CDU and the pro-business Free Democrats (FDP) win the general election on September 27.

“If you’re going to overhaul tax policy generally, then you need to determine whether the Soli needs to be kept,” Althaus told business daily Handelsblatt. “The Solidaritätszuschlag is essentially a tax that all Germans, in the west and east, pay according to economic ability.”

Althaus, who himself faces re-election at the end of August, could run afoul of Merkel for his suggestion. The first pan-German chancellor to grow up in East Germany, she has repeatedly rejected ending the surcharge.

But criticism of the Soli, which filled the federal government’s coffers with nearly €13 billion last year, has increased in recent years because the funds are no longer exclusively tied to helping rebuild the eastern part of the country.