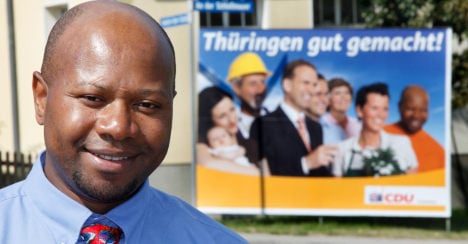 The NPD in the eastern German state released a statement on Tuesday encouraging CDU member Zeca Schall, originally from Angola, to “go home.” Schall has lived in Germany for 21 years and has been a German citizen for four years.

Frank Schwerdt, head of the state NPD chapter, was quoted in a press release on the party’s website encouraging Schall to step away from German politics, go back to Angola and let a native German take over his responsibilities. He also urged NPD supporters to take the message to Schall themselves.

Then on Wednesday a statement from the NPD claimed that the CDU had begun replacing election posters featuring the “token negro” to acknowledge that despite years of “re-education” immigrants are still not welcome in the state.

“I didn’t expect the governing party to buckle so soon. I’m that much happier that our campaign is bearing fruit,” Schwerdt said in the new statement, adding that it could only be topped by Schall’s return home or willingness to act as the state’s “Repatriation Commissioner.”

“We condemn the NPD’s actions in this matter,” Thuringia’s CDU state spokesperson Heiko Senebald told The Local on Thursday, adding that the party has indeed replaced the posters that included an image of Schall, but said the decision was part of a wider campaign plan.

“This has absolutely nothing to do with the NPD. We won’t let them intimidate us,” he said. “The sign change began on August 10 before any of this happened and is simply the second poster in a three-wave series.”

Meanwhile the CDU has filed a criminal complaint against the NPD for incitement of racial hatred and set up a web petition where Germans can show their solidarity with Schall.

Earlier in the day, the party told German daily Der Tagesspiegel that Schall had been shocked by the message the NPD is sending out to him, but not intimidated. He is now under police protection

The NPD’s statement on Thursday went on to insist that the use of “Neger” in reference to Schall was in no way insulting because it stems from the Latin word for black, and the party had the “fundamental human right” to describe reality. But the word can signify either “negro” or “nigger” in German depending on the user’s intent.

Schall once ran for the district council of Hildburgshausen, on Thuringia’s border with Bavaria. The 45-year-old is a known and very active member of the local CDU, and has had taken part in Chancellor Angela Merkel’s integration policy team.

Senebald added that the NPD only has 480 members in Thuringia out of an estimated 7,000 members nationally. Though the party holds seats in the state parliament of neighbouring Saxony, the party is not expected to do well in Thuringia’s state election on August 30.