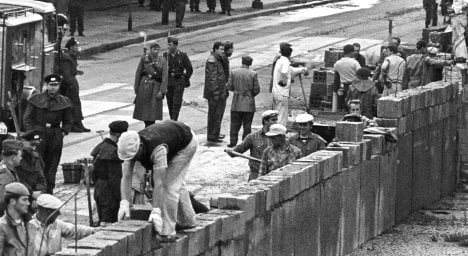 Those images have been revived as the country gears up to celebrate 20 years since the hated Berlin Wall was finally yanked down in a peaceful revolution on November 9, 1989.

More than 1,000 people lost their lives trying to escape the oppressive communist regime in East Germany to a life of freedom in the West, according to some victims’ groups. Official figures put the death toll at at least 270.

Those killed ranged from one-year-old Holger H., accidentally suffocated by his mother to stop his crying alerting guards, to 80-year-old Olga Segler who died of wounds sustained during her attempt to flee into West Berlin, according to the Berlin Wall Foundation.

From the 1950s until the Wall went up, some 2.5 million people had drained out of communist East Germany from a population of 19 million, prompting the desperate regime to seal the border in a secret operation codenamed “Rose.”

Overnight on August 12, tens of thousands of guards, soldiers and police hastily erected checkpoints and barbed-wire barriers, imprisoning their own people and literally cementing the Cold War division of Europe.

On what became known as “Barbed Wire Sunday,” some awoke to find themselves suddenly trapped in the Soviet sectors, separated overnight from families, friends and loved ones who happened to live on the other side of the Wall.

Images of panicked East Berliners who lived on Bernauer Strasse, a street that ran along the border, jumping out of their apartment windows into nets held by West Berlin firemen were beamed to a shocked world.

One resident, 77-year-old Frieda Schulze, found herself in a dramatic tug-of-war between east and west as she dangled from her apartment window, her arms gripped by East Berlin officials inside the room and her legs by West Berlin firemen on the street below.

In another famous image, the Church of Reconciliation on Bernauer Strasse was walled off with western congregation members prevented from worshipping.

Frieda Naumann, 67, a student in West Berlin at the time, said no one had any idea what was about to happen.

“I spoke to the priest of the church the day on the 12th (August). Like all of us, he knew nothing about it,” she told AFP.

Karola Habedank, 55, a small child living in East Berlin at the time, said her father was also in the dark but that she and her family were saved by friends in the West who heard rumours the border was to be closed.

On the morning of August 13, the family fled East Berlin using identity passes provided by their western friends.

“If it wasn’t for them, I would have been stuck in the East for all that time,” she told AFP. “But I had little friends living in the same house whom I never saw again.”

Time and again, citizens stuck in the East were rescued by friends and families from the West, she said. “It happened fairly frequently. Our story was by no means an isolated case,” she said.

Gradually, the barbed-wire fences were replaced with a solid reinforced concrete Wall splicing Berlin in two, while another cut West Berlin off from the surrounding East German state.

The Wall was manned by thousands of armed guards with orders to “stop or liquidate” anyone – including children – trying to breach what was officially known as an “anti-fascist protective barrier.”

Nevertheless, around 5,000 people managed to escape, according to the “August 13 Working Group,” which researches the Wall, until the historic day in November 1989 when the doomed East German regime opened the despised barrier.

Nowadays, only small fragments of the Wall are left scattered throughout the city.

But even dismantled, to many Berliners the Wall remains a potent symbol of a divided German society and a reminder of the Cold War when all eyes were fixed nervously on their city as the world’s two nuclear superpowers faced off.

And for some, while the Wall may have disappeared physically, the mental scars remain.

“I don’t think I have ever cried so much as when the Wall came down. It was wonderful,” said Habedank. “But I think the unity we now have is still not yet in everyone’s heads.”