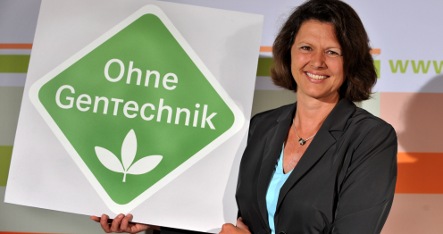 Just say no to wacky genes in your food. Photo: DPA

The green and white logo, which reads Ohne Gentechnik in German, will guarantee that food has no trace of genetically engineered substances.

Though companies have had the option of using a label to verify this since 2008, it was not used often, Aigner said.

“Through the adoption of a universal logo, consumers’ freedom to choose will be strengthened, and I hope that the label will be used actively,” Aigner said in Berlin.

A majority of Germans prefer not to buy GM food and consumer and environmental organisations have welcomed the label.

“The new seal achieves clarity in the labelling jungle,” said genetic engineering expert for Greenpeace Barbara Kamradt, adding that it will also increase the value of these products.

But consumer organisation Foodwatch was sceptical, suggesting a “With Genetic Engineering” label too.

“If animals eat genetically engineered feed from their trough, this doesn’t have to be indicated on meat, milk or eggs. If consumers buy these products they are supporting genetic engineering against their will,” Foodwatch head Thilo Bode said.

Voluntary labelling is not adequate because most large grocery chains have so far blocked the use of the label, German Nature Protection Association (BUND) said.