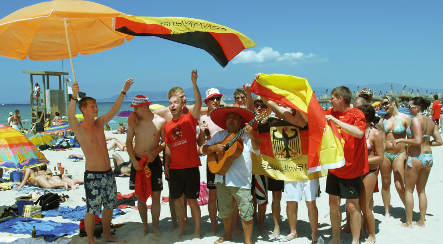 German tourists were relaxed about the deadly bombing 11 days ago by Basque independence group ETA, with only a few vacation cancellations, the magazine reported. Further attacks over the weekend will also likely not have an effect on their trips, professor of tourism economics at Harz University Karl Born predicted.

“I don’t think that alone will cause the flow of bookings to cease tomorrow,” Born told the magazine.

The Spanish government insists that the island is a secure tourist destination, meanwhile the German government has not issued a travel warning, instead recommending that tourists avoid large crowds.

The airport closure following the first bombing had a more negative effect on tourism than the actual violence, Born said. According to him, political issues remain in the background when it comes to travel decisions, but events that disrupt travel become problematic.

No one was injured in three blasts perpetrated by the violent separatists over the weekend, before which they made telephone warnings. They were targeted in tourist areas. But two Spanish police officers were killed in the car bombing 11 days ago.

If Germans are involved in such attacks, then media reports cause potential tourists to the area feel a sense of personal danger, Born said.

“That is always a special question for tourist, is there a personal danger for me or not,” Born said.

While German tourists view countries like Egypt as potentially dangerous, Mallorca remains on the “good side,” mainly because the destination is so popular. The island is known for being full of drunken German tourists during the summer months.

“One feels more at home there and doesn’t take the threat as seriously,” Born said