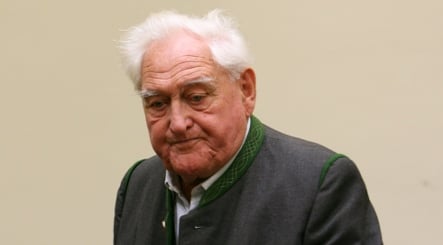 Prosecutors in the southern city of Munich have demanded life in prison for Josef Scheungraber for crimes they say he committed 65 years ago in Falzano.

He has been on trial since September on charges of ordering the murders on June 26, 1944 in retaliation for an attack by Italian partisans that killed two German soldiers.

Scheungraber’s men are alleged to have shot dead a 74-year-old woman and three men in the street. They then forced 11 males aged between 15 and 66 into the ground floor of a farmhouse which they then blew up.

Only the youngest, Gino Massetti, survived, but with serious injuries. Six decades later and an old man himself, Massetti testified during the Italian trial.

Scheungraber was charged with 14 counts of murder and one of attempted murder.

“He denies the charges and disputes having anything to do with these acts,” said one of his lawyers, Christian Stuenkel, calling for his acquittal.

Scheungraber, at the time the commander of mountain infantry battalion Gebirgspionierbataillon 818, was sentenced in absentia in September 2006 to life imprisonment by an Italian military tribunal in La Spezia.

The La Spezia court has tried several former Nazis in absentia but none has been brought to justice, with Germany as a rule not extraditing its citizens without their consent.

He told the Munich court that he handed the 11 males over to the military police, after which he “never heard what happened to them.”

Scheungraber spent decades after the war as a free man in his hometown in Bavaria, running a woodworking shop and participating regularly in commemorations for fallen Nazi soldiers.

He is hard of hearing and walks with a cane but has appeared in good health during his 11-month trial.

His is expected to be one of the last cases in Germany dealing with atrocities of the Nazi era.

One other case pending is that of John Demjanjuk, 89, a Nazi death camp guard deported in May from the United States for allegedly herding more than 29,000 Jews to their death. Last month he was declared fit to stand trial.