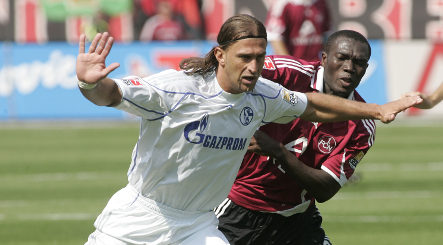 Kuranyi was on target either side of half-time to give the Royal Blues from the industrial Ruhr valley the points with Slovakian Marek Mintal netting a late consolation for their southern opponents.

But despite the win, Magath was not happy with his side’s performance.

“What we showed late on after the Nuremberg goal was not worthy of the Bundesliga,” he raged after the hosts had threatened to overcome the deficit in the closing stages.

“I don’t know if you were watching the game or playing cards during it,” Magath sniped at a reporter afterwards who unwisely questioned his bad mood.

Magath led unfashionable Wolfsburg to the title last season and then switched to take on a new challenge having already lifted two championships – and German Cups – with Bayern Munich after earlier league cup success with Stuttgart.

The Bavarians, coached by experienced Dutchman Louis Van Gaal, had to soak up ferocious early pressure from a Hoffenheim which spent the first half of last season – their debut year in the top flight – in the title race before falling away.

Missing the unfit quartet of Franck Ribery, Luca Toni, Miroslav Klose and Martin Demichelis, Bayern did not make it a 58th birthday to remember for Van Gaal as they came off worst in the opening stages.

Josip Simunic thought he had headed Hoffenheim in front on ten minutes but the referee ruled his effort had not crossed the line. Instead, against the run of play, Bayern went in front on 25 minutes when Danijel Pranjic fed Ivica Olic for a neat close-range finish.

Hoffenheim got back on terms four minutes before the break when Nigerian Chinedu Obasi fired a sweeping left-footer past keeper Michael Rensing.

Van Gaal said: “We forgot how to play in the first half. We had chances but didn’t bury them,” noting that last year’s title went begging by two points.

Magath’s departure has not affected Wolfsburg, as the club from the home of Volkswagen began their title defence with an impressive 2-0 home win over Stuttgart on Friday, striking an early blow against a team tipped as potential successors to the crown.

Wolfsburg coach Armin Veh, who arrived from Stuttgart in place of Magath, said his side were worthy winners.

“After a very equal first half, where either side could have scored, we then dominated the second half and deserved the victory.”

Elsewhere, Werder Bremen, who has lost last season’s star man Diego to Juventus, slid to a demoralising 3-2 home loss to Eintracht Frankfurt while Bayer Leverkusen had to settle for a 2-2 draw at promoted Mainz.