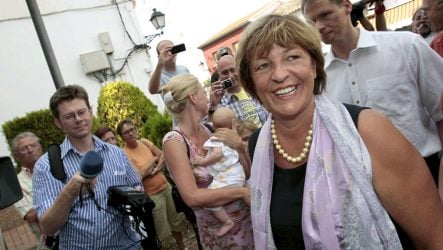 The Federal Audit Office released a statement on Saturday which exonerates her from any wrongdoing, saying she will pay tax on the greatest part of the journey, just classifying 72 kilometres as official business.

“The Minister for Health used her official car within the relevant rules. There was no burden placed upon the federal budget,” the statement says.

Schmidt, who has been Health Minister for eight years and a member of parliament since 1990, is one of the most experienced SPD politicians. But her reputation has been badly damaged by the car affair.

It was stolen while in Spain, a story which led to revelations of how she had told her chauffeur to drive from Berlin to her holiday home so she could undertake some official business.

Now the audit office says she registered the 2,500 kilometre trip to Spain as a private matter, writing off just 72 kilometres as official.

The Tagesspiegel newspaper reports on Saturday that she is likely to be brought into the party’s election team by chancellor candidate Frank-Walter Steinmeier, who is said to be keen to have her by his side.

Schmidt agreed to her exclusion from the team while the investigation was ongoing, the paper said, although some in the party criticised Steinmeier for not simply standing behind her and including her regardless.

But the Focus magazine quoted unnamed party insiders saying that Steinmeier and party leader Franz Müntefering have already decided she remain out and that her career is over no matter what the audit office says.

“She is an enormous burden for us in the election campaign, the whole topic damages us hugely,” a source identified only as a ‘top politician’, is quoted as saying.

Schmidt said on Saturday of the audit report, “The result is clear – there was no detriment to the Federal Republic of Germany. The separation of official and private transport was correct,” she said.

She said she regretted that, “initially the impression was created that the rules concerning the use of the official car were not correctly used.” And she said she could well understand how this impression could have annoyed citizens.

“I will, in the future, strictly separate official appointments from my holidays in order that it does not appear that private and official are mixed.”

The election will be held on September 27. Currently the SPD is attracting just 20 percent support according to pollsters Forsa, 17 percentage points behind Angela Merkel’s Christian Democratic Union.