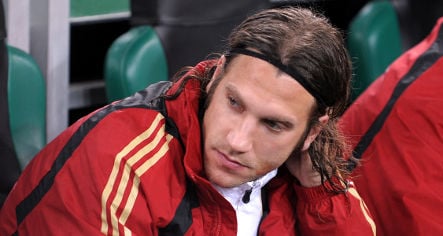 Ballack, 32, was forced to fly home early from his club Chelsea’s pre-season tour of the United States with a fractured toe, but the midfielder is set to figure in the Community Shield clash with Manchester United on Sunday.

Löw admitted on Thursday that before the start of the German football season this week he had opted to play it safe.

“Calling up players even before the first day of the Bundesliga is not an easy thing … that’s why we’ve decided mainly to take players that we know well,” explained Löw.

Löw, however, opted to overlook Frings, who has been out of favour since Euro 2008, when Germany finished runners-up.

“Torsten is a very experienced player with almost 80 caps who, if he is called up, has to take to the field. I’ve spoken to him and told him that for the moment Thomas Hitzlsperger had the advantage in this position,” said Löw.

Since the Euro 2008 the 32-year-old Frings has made just one six-minute appearance in a World Cup qualifier against Russia, and played in a 1-0 friendly loss to Norway earlier this year.

Without a regular replacement in goal since the international retirement of Jens Lehmann, Löw has opted for the experienced hands of Robert Enke (Hanover) and Tim Wiese (Bremen), over the new guard Rene Adler (Bayer Leverkusen) and Manuel Neuer (Schalke 04).

The only newcomer in the line-up is Stuttgart midfielder Sami Khedira. Brazilian striker Cacau, who recently gained German citizenship, has been called up after his participation in the tour of Asia earlier this summer.

Germany are currently leading Group 4 one point ahead of Russia, who they play on October 10.

Azerbaijan, coached by German Berti Vogts, are fifth with one point.