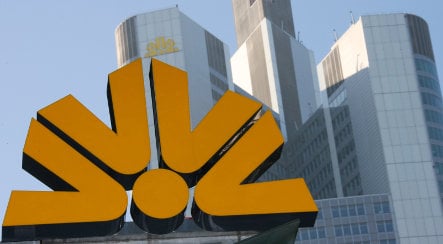 Commerzbank, the second-biggest German bank, joined a list of big banks which have unveiled weak results when it posted a net loss of €746 million ($1.08 billion). That compared to a profit of €200 million in the same period of 2008. The result was much worse than an average analyst forecast for a loss of €636 million compiled by Dow Jones Newswires.

“I cannot be satisfied” with the results, finance director Eric Strutz acknowledged during a telephone press conference. “But we are advancing by stages, we will become profitable once again,” he stressed.

In the first quarter of the year, Commerzbank, in which the state owns a stake of 25 percent, had suffered an even bigger net loss of €861 million. But the third quarter had gotten off to a “good start,” Strutz said.

Commerzbank chairman Martin Blessing said in a statement that “2009 will remain a challenging year but we are heading in the right direction.”

The bank reported an operating loss of €201 million in the three-month period, better than its first-quarter loss of €591 million. The acquisition of Dresdner Bank weighed on the results, forcing Commerzbank to book another €216 million in charges from a projected total of around €2 billion.

Blessing said his bank was “running perfectly to schedule with the integration of Dresdner Bank.” But Commerzbank more than doubled provisions against risks and losses to €993 million as it braced for loan defaults from recession-hit businesses.

It is also exposed to slumping real-estate markets in Britain, Spain and the United States, Strutz said. The bank depreciated the value of risky assets by €621 million, on top of €5.8 billion in write-downs since the beginning of 2008.

“Due to the ongoing difficult markets, a forecast for all of 2009 is still not possible,” the statement said.

A positive development at Commerzbank was an increase in its Tier 1 ratio, an important indicator of financial health, to 11.3 percent.

To raise badly-needed cash, it sold stakes in the industrial gases group Linde, the airline Lufthansa and the conglomerate ThyssenKrupp, earning €328 million in the process, Strutz said.

The bank planned to reimburse €18 billion in state aid by 2011 if financial markets stage a strong recovery, the statement added.

Blessing added that lending to German-based companies stood at a record €134 billion, amid a controversy over whether commercial banks are squeezing off business credit needed to pull Europe’s biggest economy out of its worst recession since World War II.

Shares in Commerzbank had posted strong gains in early trading, but in midday deals they showed a loss of 1.86 percent to €5.80 on the Frankfurt stock exchange, while the DAX index on which they are listed was 0.65 percent higher overall.