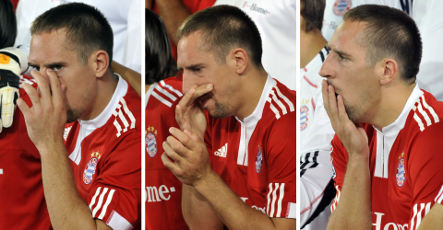 The man fans once hailed as “Kaiser Franck” is looking far from imperial and the additional recuperation period for the tendonitis in a knee may give the 26-year-old midfielder time to carry out some public relations to polish up his image.

The France international’s commitment to the mighty south German club has been tarnished after a summer-long sequence of speculation about a move to Real Madrid, Barcelona or even Manchester United.

In the end the big-spending Spanish club went away frustrated, saying the asking fee set by Bayern was over the top.

Outspoken Bayern Munich president Franz Beckenbauer blasted Ribery for being more interested in his own career than the club and suggested that the player could still be sold – for €94 million.

“Of course we would expect the market price, and if Cristiano Ronaldo is worth €94 million, then Ribery is worth a comparable sum. But if no offer is forthcoming he must fulfil the terms of his contract until 2011,” he told Sport Bild newspaper.

Commentators were not entirely convinced by a statement from Bayern management which said: “Bayern have at no time had and do not have the impression from Franck Ribery that he would only use Bayern in order to further his own career. He has always given himself and his abilities to the service of the team.”

As another season in Germany looms, Ribery’s attitude continues to make headlines. When the team assembled for the official pre-season photo session, observers noted the Frenchman was unsmiling and distant.

He may have been wishing he was at a different stadium – namely the Bernabeu in Madrid, hob-nobbing with Ronaldo, Kaka and Karim Benzema as Real Madrid chairman Florentino Perez proudly showed off his multi-million euro signings in the Spanish sun.

New Bayern manager Louis van Gaal isn’t sure whether he will risk including him in the squad for the first game of the season.

“I know that he definitely won’t be starting, and I can’t even say whether he will be in the squad for the game,” said van Gaal on Wednesday.

The ex-Marseille player was ruled out of the team for the pre-season Audi Cup tournament involving Manchester United, AC Milan and Boca Juniors.

Despite his lack of match fitness he was picked in the France World Cup squad for next week’s match with the Faroe Isles by Raymond Domenech.

Domenech, ever one to upset club managers by picking unfit players, conceded that Ribery would play if anything just a cameo role before being called upon for more serious challenges against Romania and Serbia in September.