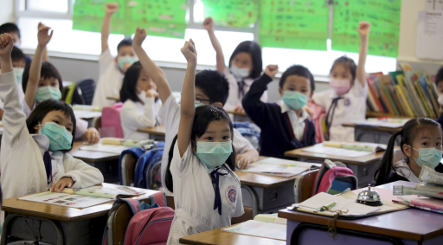 The Asian solution to the start of the school year. Photo: DPA

Director of Halle University’s institute for medical microbiology Alexander Kekulé told daily Handelsblatt late on Tuesday that giving children more time off from school would be a “good chance to avert the spread” of the A/H1N1 virus.

He predicted a growing rate of infection just ahead of the new school year and recommended that parents of children in day care centres also take precautions.

The state of North Rhine-Westphalia plans to decide within the next week whether it will extend holidays to keep the epidemic at bay, the paper reported. School is set to begin on August 17.

Meanwhile the states of Bremen, Lower Saxony, Saxony-Anhalt and Thuringia told the paper they see no reason to give their students a few extra days of fun due to the virus. School in these states begins again this Thursday. Classes in the state of Saxony begin next Monday.

But Kekulé said that schools and day care centres are the fulcrum of a pandemic because influenza spreads faster among children due to their inability to focus on hygiene like adults.

According to the Robert Koch Institute, Germany’s infectious diseases authority, there were 7,177 confirmed swine flu cases in the country as of Tuesday.