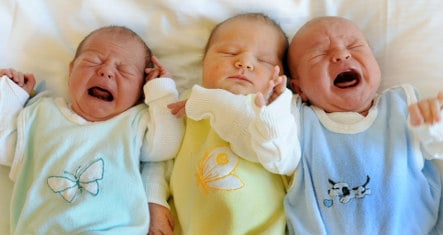 Eurostat’s data for Germany in the demographics study released on Monday is “either wrong or outdated,” the Family Ministry told told news magazine Der Spiegel.

“The Eurostat study is based on old data,” Family Ministry spokesperson Marc Kinert confirmed to The Local, adding that it had since been fine-tuned.

The study, which also showed that Germany had the highest death rate in the EU (10.3 per 1,000), is an embarrassing blight in the Family Ministry’s campaign to encourage population growth in a country where shrinking population threatens major economic turmoil within the next several decades.

The Family Ministry told The Local that current Federal Statistics Office (Destatis) numbers show the birth rate has however “remained stable” at 8.3 births per 1,000 for last two years.

“Therefore they are stable and on the same level as in 2005 despite the fact that in Germany we have half a million fewer potential mothers (women between the ages of 15 and 49-years-old) than four years ago,” Kinert said.

But Destatis, the data source cited by the Family Ministry, also provided information for the EU study. The problem lies in the fact that the Destatis numbers are still provisional, with official 2008 statistics not set for release until September.

“The figure of 675,200 births in 2008 used in yesterday’s Eurostat News Release was reported to Eurostat by the Federal Statistical Office on May 18, and it is marked as provisional,” Eurostat spokesperson Julia Urhausen told The Local in an email, adding that the new number of 682,524 births reported by Destatis is “very recent” and did not reach Eurostat in time for the report’s publication.

“I would note that this is in fact a very small upwards revision of the figure,” Urhausen added.

Meanwhile the Family Ministry insists that German reproduction remains robust despite what it cites as difficult circumstances.

“The knowledge that Germany has a very low birth rate in international comparison is nothing new,” the ministry said in an official reaction to the study.

While birth rates began falling in Germany earlier than neighbouring nations, political action to stop the trend did not begin until 2005, much later than in other EU countries. But by using successful examples like France and Sweden, Germany has managed to increase the German desire to build their families, the statement said.

Family Minister Ursula Von der Leyen has touted German government programmes aiming to stop the demographic collapse such as offering new parents Elterngeld, or “parent money,” which equals up to 70 percent of their salary to stay home with their newborns for up to one year.

But she came under fire in February when she boasted an increased national birth rate for 2008 only to have Destatis lower the numbers shortly thereafter. Critics said she was sugarcoating statistics without addressing real problems.