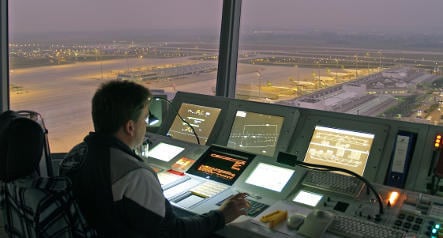 Because the control tower was not occupied when the close call occurred, the four employees were accused of “blatant violation of the regulations.”

The collision nearly happened at 2 am on July 18 when a Cessna plane took off from a taxiway instead of a runway, just missing a Boeing 737 that was on the same tarmac.

According to the DFS, the control tower employees knew nothing of the incident until pilots in the planes informed them afterwards.

Daily Frankfurter Rundschau reported on Tuesday that if the Cessna had flown just 20 metres lower, the two planes would have collided.

“It was close,” a DSF spokesperson told the paper. “People could have been killed.”

At least two of the suspended employees should have been in the tower, but only one person was present, the spokesperson said, adding that all four are now under investigation.

According to the paper, the tax-funded DFS, which employs some 5,300 workers, feels their reputation has been damaged by the near miss.