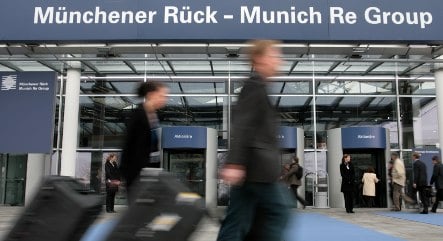 Munich Re reported a 14-percent rise in net profit to €691 million ($995 million). Analysts polled by Dow Jones Newswires had expected it to remain stable at the year earlier figure of €606 million. The group also raised slightly its full-year target for gross premiums, the sector benchmark on which it bases forecasts.

Chairman Nikolaus von Bomhard said in a statement: “We were able to benefit further from our capital strength and exploit our scope for profitable growth. We regard the effects of the economic crisis as limited in extent for the Munich Re Group.”

At Munich Re, gross premiums gained 14.6 percent in the second quarter to €10.326 billion, better than an average analyst forecast for €9.8 billion, while operating profit jumped by 26.2 percent to €1.373 billion.

Looking ahead, the reinsurer said it expected gross premiums in both primary insurance and reinsurance to range between €40-42 billion, up from a previous forecast of €39-41 billion which was itself the result of an initial upward revision in May.

But Munich Re warned that “uncertainties resulting from the economic crisis continue to apply to both underwriting business and investments, making a forecast for the 2009 annual result particularly difficult.” It stood by a target of a 15-percent return on risk-adjusted capital however, saying the goal is “ambitious … but still achievable.”

Munich Re had a second-quarter boost from its new US unit, the Hartford Steam Boiler Group, which contributed €173 million in gross premium income, the statement said.

The German insurer reduced the value of its assets by relatively modest €125 million, noting that in the second quarter of 2008 it “had had to absorb substantial write-downs on its equity portfolio” of €660 million.

Von Bomhard said: “It is evident that we are faring well with the broad diversification of our business across business fields and regions.”

Shares in the reinsurance giant slipped however by 0.89 percent to €103.78 in midday trades on the Frankfurt stock exchange, while the DAX index on which they are listed was 0.78 percent lower overall.