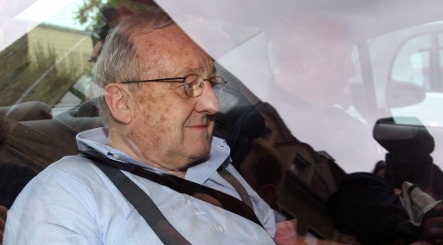 Schreiber is a key figure in the slush-fund scandal that disgraced former Chancellor Helmut Kohl’s conservative Christian Democrats (CDU). But in his adopted home of Canada, he also brought former Prime Minister Brian Mulroney into ill repute. Now, after a decade-long legal battle, he has been extradited to Germany.

In Canada, Schreiber lived life well, enjoying residences in the business capital Toronto and the federal capital Ottawa. He developed a reputation as a man who loved hobnobbing with power brokers in both Canada and Germany.

But like the life he left behind in Germany, Schreiber flew out of Canada on Sunday under a cloud of suspicion and scandal. On July 28, the Oliphant commission held its final day of hearings in which Schreiber testified that he gave Mulroney €196,000 (CAD$300,000) to lobby on behalf of Thyssen Industries to the Canadian government to build an armoured vehicle plant while the Progressive Conservative leader was still in power. Mulroney claims the funds he received, €147,00 ($225,000 CAD) changed hands shortly after he left office in 1993.

As part of the agreement to get Schreiber to testify, Canadian officials said the weapons-lobbyist turned pasta dealer could stay in the country he’s been a citizen of since 1982 until the end of the hearings. At the weekend, a last-ditch effort hearing to halt the extradition was held and denied. He was met by German police as he landed in Munich on Monday morning.

Arrested in 1999 by the Canadian authorities, the 75-year-old will now face prosecution for charges related to a slush-fund scandal that rocked Kohl’s conservatives in 1999.

After enjoying successful sales careers in his hometown of Hohegeiß im Harz and Braunschweig, Schreiber moved on to Munich, where he met his business mentor Franz Josef Strauß, who went on to become leader of the Christian Social Democrats, Bavarian sister-party to the CDU.

Shortly after that meeting, Schreiber’s career in weapons sales took off. He managed contracts for helicopters, Airbus planes and armoured personnel carriers for Germany and other countries. He mediated ties from steel giant Thyssen and the Bavarian state government and the federal intelligence services based in the Munich suburb of Pullach, among other contracts.

However, between his legitimate dealings, an investigation based in Augsburg into the CDU’s political finances during the 1990s put the heat on Schreiber. Under investigation for allegedly exchanging a briefcase containing €511,000 (1 million German Marks) with former CDU treasurer Walter Leisler Kiep in a Swiss parking lot in August 1991, Schreiber emptied all of his German bank accounts and used his Canadian passport to settle permanently in Toronto in 1996.

But his past caught up to him in 1999, when Kiep was arrested in Germany. The Canadian authorities arrested Schreiber on a German warrant. Tracing Schrieber’s briefcase of money into the CDU’s party coffers, Kiep as well as two Thyssen managers and Ludwig-Holger Pfals, a former liaison to the defense ministry were all found guilty of corruption.

Another €51,000 (DM100,000) donation made by Schreiber to the CDU also forced the then party leader Woflgang Schäuble to resign in 2000, paving the way for current Chancellor Angela Merkel to take the helm of Germany’s conservatives by disavowing the shady dealings of the Kohl era.

The Augsburg investigation uncovered millions in illegal donations squirreled away in slush funds under Kohl’s leadership in the 1990s. Kohl initially denied knowledge of the accounts, putting the scheme entirely on Kiep. However, in a teary television appearance weeks after Kiep’s arrest, Kohl admitted he knew about the illegal donations. But he stubbornly refused to name the donors, claming their privacy was protected by his word of honour.

After landing in Munich on Monday, Schreiber was whisked away to prison in nearby Augsburg.

Whether his arrival in Germany will now produce any new revelations about the CDU’s misdeeds under Kohl is unclear, but he claims he has become an unwilling participant in the upcoming German election. The vote takes place on September 27. Schreiber’s trial date is still pending.

If found guilty on all charges, Schreiber faces 15 years in jail.